If you’re a fan of the game of soccer, odds are you have plenty of complaints and criticisms for the governing body FIFA. Most recently, FIFA was the target of immense criticism when they selected Qatar as the home of the 2022 World Cup. 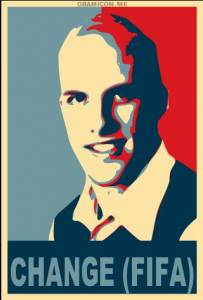 Think you can do a better job running FIFA? So does writer Grant Wahl, a current soccer columnist for Sports Illustrated. Wahl intends to run for FIFA President, believing that the current system could greatly benefit from an outsider’s fresh perspective. Who’s to say he is wrong? The current system at FIFA absolutely reeks of corruption and could use a complete overhaul. Unfortunately, that’s definitely an “easier said than done” statement.

Obviously, becoming the head of such an organization as FIFA is no easy task. However, it is easier than you think to get one’s name on the ballot. Wahl needs just one member of the current FIFA association to nominate him and he will find his name on the ballot when FIFA goes to their congress at the end of May.

Will someone actually nominate him? Considering how fickle FIFA members can be, we doubt he will be successful in securing a nomination, but considering how the game continues to be slow to evolve and continues to make odd decisions (Qatar?), we wouldn’t completely rule it out.

This story is really just that – a story. The odds of Wahl even making the ballot are pretty remote, but the story of one writer trying to take matters into his own hands in order to make the game he loves better is one we can all relate to.