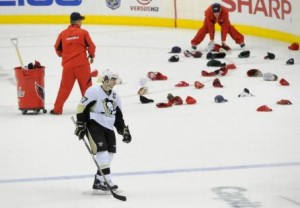 In case you weren’t aware, one of the best match-ups in Hockey history is currently going on between Alex Ovechkin’s Capitals and Sidney Crosby’s Penguins. Both Ovechkin and Crosby scored Hat Tricks (video of all 6 goals) this evening, but the real story came out in the post-game interviews. Dan Steinberg at D.C. Sports Bog has the story of Sidney Crosby complaining about the fans throwing hats on the ice :

If you’re one of the best hockey players in the world, and you have a potentially undeserved reputation for excessive complaining, and you’re asked what you were discussing with a game official following your rival’s game-clinching playoff hat trick, you could potentially say, “Oh, it was nothing.” Or, if you were feeling frisky, you could venture further afield.

“People kept throwing hats,” Sidney Crosby said tonight. “I was just asking if he could make an announcement to ask them to stop. I mean, the first wave came and then I think they were all pretty much picked up, and then more started coming. So for us, we just wanted to make sure we kept kind of moving and kept the game going, wanted to try to get back in it. So wasn’t complaining about anything.” 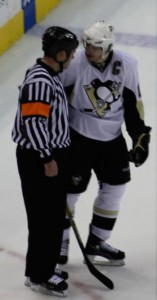 Wow, just wow. This was before Sid the Kid scored his own hat trick, which was answered with 1 or 2 hats being thrown to the ice. I guess Don Cherry and Sidney Crosby find that to be a more suitable manner for celebrating a trick. Ovechkin and his rowdy Capitals’ faithful were apparently inappropriate in their celebration once again.

I am assuming that this type of complaint is really an attempt at commentary on the fans in Washington. The Capitals are often mocked in hockey circles for having uneducated fair weather fans. So to complain that hats came down late is really a commentary on the fans being too stupid to throw them earlier. Let’s assume that it really was a case of uninitiated fans, experiencing their first hat trick, tossing hats onto the ice late, and not that they just took awhile to make it down from the upper deck.

Sidney Crosby spends all night, every night, whining to the refs; about faceoffs, offsides, goals, and perceived non-penalty calls. But to extend that to complaining about the fans? Seriously? Sidney, you are playing a game which was left for dead just a few years ago, any new fans this league can get should be welcomed with open arms. This game is about the fans, and its survival is dependent on getting new fans to enjoy the game, and have a good time. Ovechkin gets that, he loves the fans, and celebrates with them.

Crying about excessive hats being thrown for a playoff hat trick is a new low for this kid. This was obviously just sour grapes and straight up whining. The Capitals are now up 2-0 in the series, and Cindy is certainly earning his reputation as a cry baby.