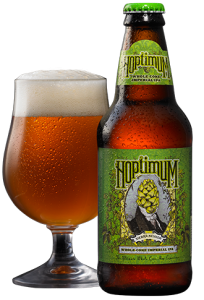 Information: Site – “A group of hop-heads and publicans challenged our Beer Camp brewers to push the extremes of whole-cone hop brewing. The result is this: a 100 IBU, whole-cone hurricane of flavor. Simply put —Hoptimum: the biggest whole-cone IPA we have ever produced. Aggressively hopped, dry-hopped, AND torpedoed with our exclusive new hop varieties for ultra-intense flavors and aromas. Resinous “new-school” and exclusive hop varieties carry the bold and aromatic nose. The flavor follows the aroma with layers of aggressive hoppiness, featuring notes of grapefruit rind, rose, lilac, cedar, and tropical fruit—all culminating in a dry and lasting finish.”

I’ve said it before and by gum, I’ll say it again: when one works at a beer store and one can get whatever one wants, even if what one wants is a tough get especially in a state three time zones away that really had no business working its way past Chicago… one can get very, very happy. Case in point: Sierra Nevada Hoptimum Imperial IPA, a beer I first noticed in the pages of Beer Magazine back in 2011. There it was: a sexy, full-page spread showing off a dude dressed like Paul Revere with a big-ass whole-cone hop for a head. And by Sierra Nevada no less? I was sold. I had to have it. And finally, here it is, in all it’s beautiful green-labeled glory.

The initial pour produces a slightly yellow-tinged head that drives upward like a froth, and only slowly recedes over a minute or so. The lacing it leaves behind is like some kind of mystical slice of church glass. The brew itself is a bright, slightly light amber color with a nose so overwhelmingly bitter and floral that it literally makes your mouth water. I get dandelions, grass, pine, pepper, and a hint of earthy notes. If the scents are this complex, there’s every reason to assume that the taste is going to be just as such.

And there it is. It’s mouth-puckeringly (yeah, made that word up… you’re welcome) bitter without being laden to the hilt with flower stem acridity and forest floor tanginess. Yet, those fleeting flavors are still there, just a bit left of center. If you bring in a bit of air into your mouth as you swirl the beer around your palate, you get so many different melodies that it’s almost too much for your senses to discern. You easily get cedar (something very unusual for me), pineapple and banana (very much there but only for a moment), and even a slight hint of vanilla that is more flowery than the actual bean itself. This is absolutely one of the most magic elixirs I have ever had the privilege of drinking. With this beer there is little to dispute the fact that Sierra Nevada -a tried and true brewery- absolutely knows what it’s doing. As for food pairing, I would absolutely drink this with barbecued ribs.