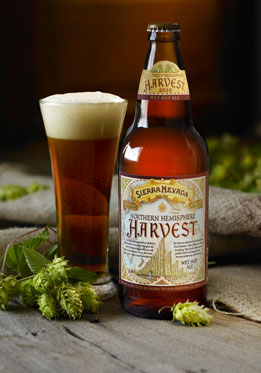 Information: Site – “The cornerstone of our Harvest series is the beer that started the modern-day fresh hop ale phenomenon in America, our original Harvest Ale. Created in 1996, Harvest Ale features Cascade and Centennial hops from the Yakima Valley in Eastern Washington. These hops are harvested and shipped as “wet” un-dried hops—the same day they are picked—to our brewery in Chico where our brewers eagerly wait to get them into the brew kettle while their oils and resins are still at their peak.”

I’m a great big fan of Sierra Nevada beer as a whole, and this special brew is sure to be no exception. First off all, it’s got one heck of a pretty label. It features rows upon rows of ripening hops and a really tiny fellow in the lower left picking them. Cool. Anyway, as we are indeed in the Northern Hemisphere, this is one we got, so let’s give it a go.

The pour is very light amber with a towering white head that fights all attempts to cascade into anything less impressive. The aroma is bright and hoppy with just a hint of sweetness that reminds one of hay… you know what I’m talking about if you’ve ever spent any time around hay: grassy and sweet. There are notes of orange peel and pepper and it has a very crisp nose.

The flavor is alive and clean with flavors of fall. It reminds one of a crisp, autumn day; the smell of the leaves, the far off thought of rain on the horizon, that tinge that one acquires in the senses that tells you winter is but a shadow away… it’s all there. I’m getting apples, a throatiness of toasted barley, and just a hint of wildflowers. It has such a tumultuous bevy of flavors that one could easily mistake one or two for something else. It’s very complex while at the same time being almost brutally simple. So tasty and it would match quite nicely with roasted pork or certainly venison.