Sign of the Apocalypse: Robert Pattinson and Jar Jar Binks 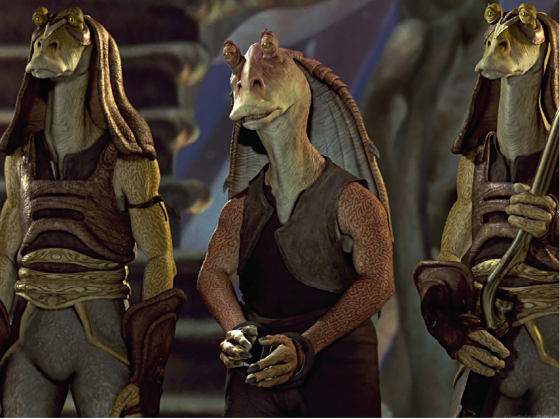 According to IGN.com, pasty shiny vampire player Robert Pattinson was inquired as to how low his standards actually went. No, this does not actually concern taking back a woman who completely lost it because a married man (not Pattinson) did not leave his wife for her. No, we are not discussing an actor whose career highpoint so far seems to be that he died somewhat valiantly at the end of Harry Potter and the Goblet of Fire.

We are not talking about the only man in the world who thought it might be a good idea if he starred in the lead role of a Kurt Cobain biopic. No, this goes much deeper and much worse. This is a discussion that might actually make people want to prove the Mayans right. Apparently, Pattinson feels that the best way to wipe the taste of the detestable Edward Cullen out of your mouth is to play one who left an even worse taste. 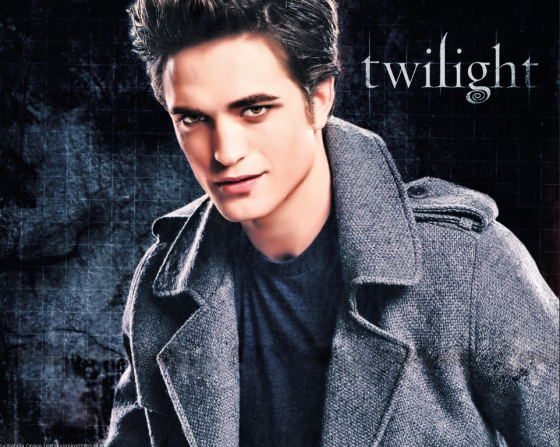 Robert was asked by a reporter if he would be interested in being in Star Wars Episode VII. Pattinson replied  “In Star Wars? Oh, absolutely. In a heartbeat.” Now granted, no matter how small the part, there are millions of guys in their thirties right now who (if given the opportunity to stand in a ridiculous Imperial Guard costume for two seconds in the movie) would call a cameo in the movie the greatest experience of their lives. Easily, this would trump their wedding day, the birth of their children, or the first time they beat their older brother in basketball. There are people whom given the choice between winning a million dollar lottery and space immortality for a thousand dollars and three seconds of screen time… well, honey we have made it through tough times before.

We also understand that there are less than desirable roles whom people would do to be a part of the trilogy. Samuel L. Jackson stated that he would be a “wookie bitch” before landing the role of Jedi Master Mace Windu. Joshua Jackson, yes Pacey from Dawson’s Creek, said he would pay Lucasfilm for the right to be in one of the movies. However, when you have all the street cred of Justin Bieber, it’s probably not the best idea to have your name associated with Jar Jar Binks. The follow-up question by the reporter was if Pattinson would even consider playing the ethnically challenged stereotype. Pattinson’s response? “I actually kind of like Jar Jar. I don’t understand what the big deal is about Jar Jar.” 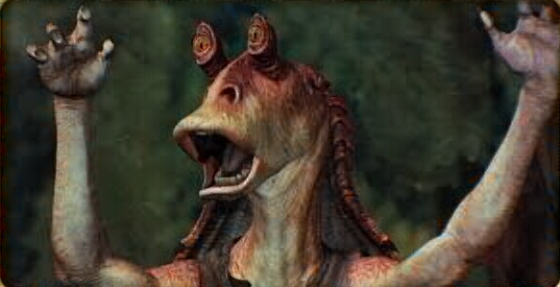 You’ll have to forgive Pattinson, who has been really popular most of his life and has probably had more sex by his age than anyone has a right too. There is a good chance he has not had a chance to think about how rock stupid some of the things he says are. For instance, Matt Damon stated after the Bourne Supremacy that he had no idea where they would go with a sequel. The man was playing Jason Bourne and had apparently never heard of or bothered to read The Bourne Ultimatum. Damon’s statement is not a defense of Pattinson, but it should be made fun of at every possible instance.

Granted, Pattinson was only 13 when Star Wars Episode I: The Phantom Menace came out. Pattinson was born in 1986 after Star Wars Episode VI: Return of the Jedi had already been out of the theaters for three years. Even with all of that, their should probably have been an attorney present before Pattinson was allowed to publicly state without a hint of irony that, “Yes, I would play Jar Jar Binks.” That is only an invitation for discussions of the Apocalypse as well as Nerd Zombies firing up photoshop. 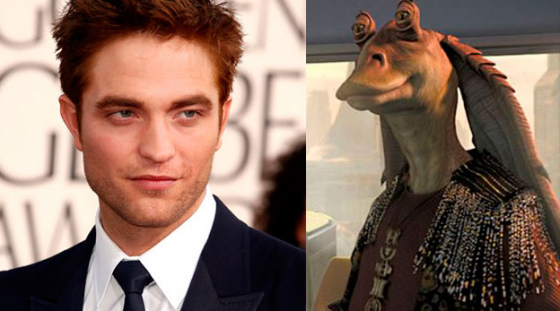