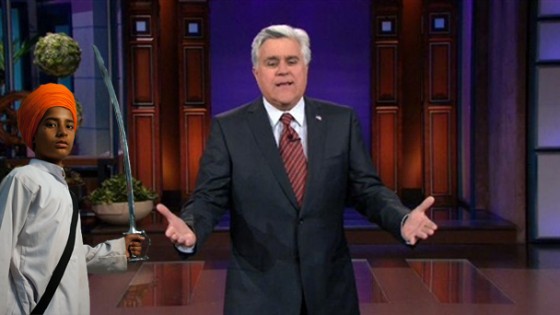 I don’t watch The Tonight Show anymore. No, I’m not one of those annoying “Team Coco” loyalists who believe Conan O’Brien shits comedy gold. I just don’t find Jay Leno particularly funny and have felt that way since the ’80s. I grew up on Letterman so as far as I’m concerned, he’s the true King of Late Night, regardless of ratings.

All that said, I’ll stand by a comedian’s right to make jokes, no matter the subject matter or how offensive certain individuals might deem said jokes. Which is why Leno being in hot water with the Sikh community over a Mitt Romney gag he told last week has me rolling my eyes.

First, the joke in question:

That is the Golden Temple, a holy shrine of the Sikhs. And now the controversy:

According to media reports here Monday, India’s minister for NRIs (Non-Resident Indians) Vayalar Ravi – currently on an official visit to the US – has objected to the remark and said he has directed the Indian Ambassador to the US, Nirupama Rao, to take up the matter with the State Department.

“It is quite unfortunate and quite objectionable that such a comment has been made after showing the Golden Temple,” Ravi was quoted stating. “The Golden Temple is the Sikh community’s most sacred place. Even our Prime Minister (Manmohan Singh, also a Sikh) went there for prayers in the New Year. I believe that the person who has shown (this episode) is not that ignorant. The American government should also look at this kind of thing.”

Whatever, dude. It was a mildly amusing quip meant to slam Romney not the Temple. But Ravi goes off the rails with the following comment.

“I wish this kind of thing is not shown by any media in the US. Freedom does not mean hurting the sentiments of others…

I know it’s hard to tell in recent years, but freedom DOES mean the right to hurt someone’s feelings.

For example, if I’m of the opinion that a certain Indian government official is an out of touch douchebag, it would probably hurt his sentiments, but I have every right to my opinion. And he can fire back and call me a dickhead blogger if he so chooses, although I’d just laugh it off because I support his right to say it, and because I have something called a spine.

If you’re Sikh and you’re pissed, get over it. It’s not like Leno said Romney was going to purchase the Temple and turn it into a meth lab/whorehouse then turn around and sell it to a greedy midget Jew with a retarded gook wife. That’s offensive, but still a joke.