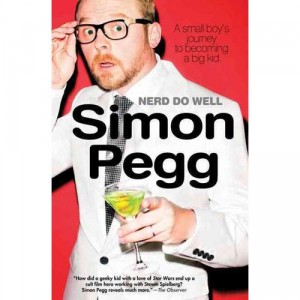 Simon Pegg is one of the most famous fanboys alive. He has been in film, TV, comedy shows, and now he can put author on his resume. The book is called Nerd Do Well, an autobiography that deals with his  years growing up, his start in acting and comedy, and touches on his recent work. Pegg, 41, wanted to write a diary of his experiences on movie sets, but was told to do an autobiography first. The first two thirds of the book covers his childhood — topics ranging from Star Wars to making out with girls.

One of the funniest things in the book is that he writes about being a superhero and injects a Batman-like feel to his stories. Most of the book is Pegg speaking about his life before he entered the spotlight. He discusses the people and things that transformed him into the fanboy at heart he is today. Pegg is very open about all subjects; one of which is what all nerds can relate to: being awkward around girls. Pegg does go off on some tangents, but if you are into his style of comedy then you will enjoy the book. You can purchase it at Amazon.com or wherever books are sold. If you are looking for a funny read then check out Nerd Do Well!  Here’s a video on the book below.