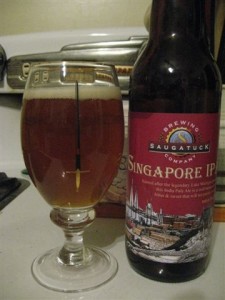 Saugatuck is one of those quaint, relatively quiet, lake-side towns the likes of which Michigan is quite well known. It is a bit like South Haven (a town more than a few out-of-staters have become acquainted with) but far less touristy and seemingly cleaner. Directly north is the little town of Douglas that, in and of itself, is merely a town one drives through heading to Saugatuck. So, where better to stick a brewery than there? I have been to Saugatuck hundreds of times to a condo on Lake Michigan once owned by my family and spent countless weeks on summer breaks as a kid hanging out on my Grandparent’s boat. But, in all honesty, it’s been the better part of fifteen years since I’ve been back. Now, it seems (since the condo and boat have long since been sold) I have a great reason to return.

As with the vast majority of IPA’s, the pour yields a rich amber-orange hue with a light, tightly-foamed crown. The wafting aroma offers up scents of grapefruits, coriander, and a light grassy overtone. The citrus smell seems to be the most prevalent, but a nutty backdrop… far back, is still present and quite nice as well.

A bitter bite is the name of the game here. The hefty grapefruit note is full on and forward with barely an accompanying melody to back it up. Sadly, on the first sip it seems to suffer as a one-note tune. As the head laces the glass from each sip, it becomes a bit more evident that other flavors play rolls, just very slight. There is a bit of wheat, a bit grassy, and a bite of pepper at the very end that clings to your tongue reminding you it’s there with each subsequent swallow. This IPA is more or less what it implies, but it just doesn’t have that additional taste level to boost it a bit beyond the standard. As for food, I would pair this with a salty sandwich like a cheese steak.