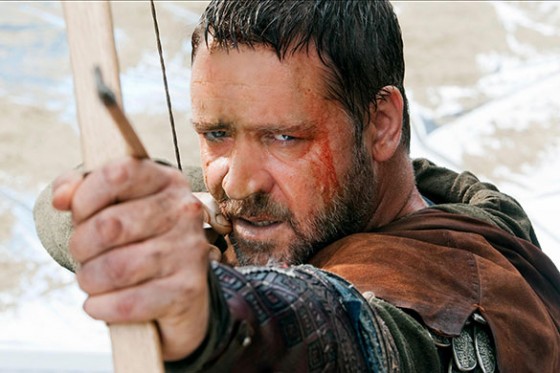 In anticipation of the new Robin Hood movie, we here at Gunaxin have compiled a list of real-life outlaws that were infinitely more badass.

Ridley Scott? Eat your heart out.

Eustace the Black Monk
(and Outlaw, Pirate, Mercenary and Rebel)

Born in the 1100s, Eustace the Black Monk was the son of a Lord, automatically making him pretty badass. Not satisfied with his plush life, Eustace fled to Spain and studied goddamn black magic.

Returning home after receiving a PhD in summoning Satan and general badassery, Eustace decided to explore the other side of spirituality and joined a monastery (probably to find God, so he would finally have a worthy opponent).

Eustace’s fugitive life began when he had a falling out with the powerful Count Renauld. Now an outlaw on land, Eustace fled to the sea becoming a pirate captain of 30 ships, selling his skills as a mercenary to England.

But when his mortal enemy Count Renauld allied himself with the English, Eustace turned on his former employees. Supporting the rebel barons of France, Eustace waged war against England for the next 5 years. Armed with only a goddamn boat oar against 20 English ships, he was eventually beheaded. Although seeing as how Eustace was Voldemort, that probably didn’t stop him from coming back. 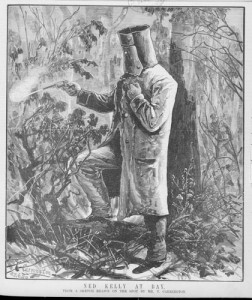 Raised in Australia in the 19th century, Ned Kelly would grow up to be one of the most famous outlaws ever. His criminal career began when a 14-year-old Ned assaulted a pig farmer named Ah Fook. Ah Fook indeed. Ned’s crimes included everything from the cold-blooded murder of a cop, to sending his enemy’s wife a calf’s testicle.

But his claim to fame? Taking 70 people hostage when the cops came for him. With no way out, Ned and his crew of three did what anyone would have done.

They donned goddamn homemade armor, and re-enacted a scene from Iron Man. 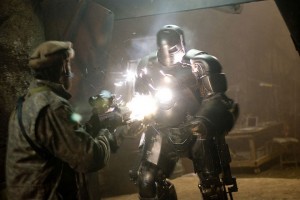 The bullets from the police could not penetrate the armor, but Ned had forgotten one, small minor detail. They had forgotten to protect themselves from the waist down. Ned, the only survivor, was hung, despite a petition of 30,000 to save his life (for pure badassery, we assume). 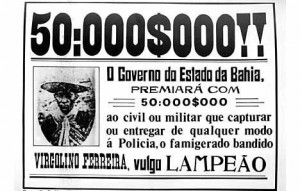 We have no idea what this says, but we’re impressed by the number of 0s.

Nicknamed “Lampiao,” Virgulino Ferrerira da Silva was the leader of a band of Brazilian outlaws in the 1920s and 1930s.

When his father was killed by police, Virgulino transformed from pansy leather craft artisan into a hardened killer. Lampiao recruited a band of 50 men and for the next 20 years waged war against the police, or whoever else got in his way— often beating overwhelming odds, such as annihilating a small government army of 200 special forces officers.

Lampiao has a rather nasty reputation, though. He was noted for his violence and abuse when looting villages. There are quite well-substantiated claims that he gouged the eyeballs and cut the tongues of his enemies.

Lampiao was betrayed by one of his followers and ambushed by police troops armed with machine guns. Lampiao and nine of his followers were killed and beheaded, so that their deaths would be believed. Lampiao’s head would remain on display for the next 30 years, because why not? 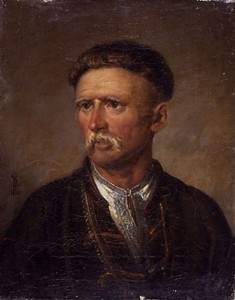 Despite looking like Charlie Brown grown up, Ustym Karmaliuk is a folk hero among Ukrainians, referred to as the “Ukrainian Robin Hood.”

Karmaliuk made a name for himself with his band of Merry Men who stole from merchants and gave to the poor. Known also as the “Houdini of Podilia,” Karmaliuk would escape from the Russian Imperial Army six times, each time to build his army larger. By the 1930s, Karmaliuk’s army was 20,000 strong, and had carried out over 10,000 raids over 20 years.

The man who eventually killed Karmaliuk (in an ambush, of course) was given a medal by the Tsar and a life pension.

Juraj Janosik
The guy was off the hook 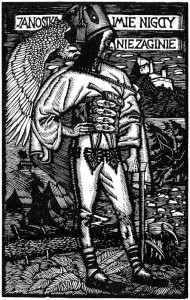 A highwayman and an outlaw in the late 1600s, Juraj was your everyday Robin Hood rip-off. He formed and led a band of forest robbers who targeted only the rich, and shared their loot with the poor. They were said to be exceptionally chivalrous and never killed any victims.

But here’s where Janosik began to show some true balls: his death. Betrayed by his former friend (who he had broken out of prison), Janosik was caught and sentenced to death. A massive hook was prepared where Janosik would have been impaled and left to die slowly. While most of us would have searched frantically for a way to get off the hook (ha!), Janosik was too manly to care.

Given an ultimatum of death by hook or using his oration skills for the government, Janosik screamed, “If you have baked me, so you should also eat me!” and jumped on the hook.

Widely known as the Thunderbolt of Sinaloa, Heraclio Bernal was famous in the 1800s for his pistol skills. When he got bored of robbing banks and rich estates, Bernal turned to armories for a challenge. 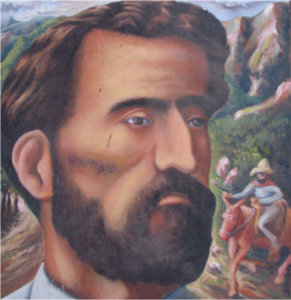 The guy who made a living robbing military weapon bases

Bernal eventually recruited a gang of a hundred outlaws, all wielding pistols. The locals loved him because, well, his nickname was goddamn “Thunderbolt.” They helped him elude the authorities, and would give him ammunition and supplies.

Bernal’s King John was the Mexican President Porfirio Diaz. Along with his life of banditry, one of Bernal’s goals in life was to prevent Diaz from being re-elected. Most of his targets were agents of authority that Bernal believed robbed him of his Constitutional rights. Bernal was basically a Mexican V, with many of his closest friends calling him a maniac. Bernal was regarded as a national threat with a massive bounty on his head.

When Bernal was shot dead to collect the bounty his popularity was so great that Diaz was forced to swallow his pride and give his nemesis a funeral speech praising him as a revolutionary who was misunderstood as an outlaw.