Six Reasons Soulja Boy Should Be Punched in the Face 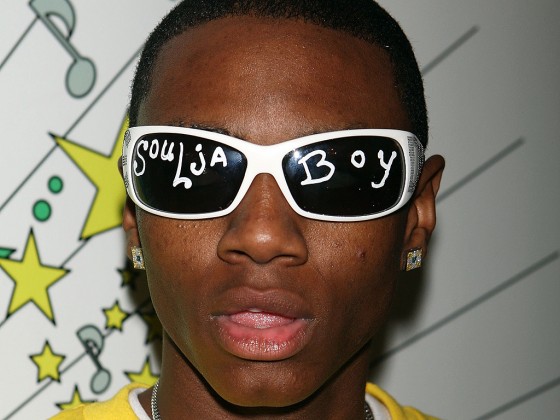 Let’s start off with some observational comedy, shall we? What’s the deal with Soulja Boy? He’s not a boy, or a soldier. And he’s certainly not a child soldier. If he was he would get less attention, which brings us to the next question. Why is Soulja Boy popular? Why do people listen when he says things?

The cause of Soulja Boy’s popularity is more elusive than Saddam Hussein in a fox hole. When most intelligent people hear a Soulja Boy song, they don’t recognize it, or even associate it with Soulja Boy. Most of them associate it with the decline in standards of musical talent in the youngest generation. Now, when people that have an IQ of less than 90 hear a Soulja Boy track, they instantly recognize it and shout “AWWW YEAH THAS MY SHIT BIOTCH!”

At first, I thought that Soulja Boy fans probably couldn’t read, because if they could, they would read the lyrics to any Soulja Boy song, realize how stupid his songs are, and then find someone else to listen to. But after reading the YouTube comments on some of his music videos, I’ve come to the conclusion that these people are semi-literate.

Fun fact about Soulja Boy: he gets one tattoo for every time he goes out in public without a shirt.

Soulja Boy’s tattoos have always caused him public relations problems. At first, people questioned whether his tattoos were real. It seems criticizing Soulja Boy’s tattoos is the worst possible insult you can use against him. But at same time, Soulja Boy loves his image, and released a statement when he met a 12-year-old with tattoos like his. If you’re curious what Soulja Boy’s tats look like, here you go: Judging from the size of his mouth, he also might have collagen injections.

Here are some of the videos he’s uploaded. We’ll call it “the best of the worst”:

Here’s Soulja Boy showing off his fashion sense on a wave-runner in Jamaica:

Look at him rock that ‘Super Soft’ life vest.

Here’s some news you can use, courtesy of Soulja Boy Tellem TV: Soulja Boy is hungry.

For what it’s worth, he also once appeared on the show The View:

Man, there hasn’t been this much unadulterated bullshit on television since the waste management episode of Dirty Jobs.

4. The song “Kiss Me Through the Phone.”

How much can be said about this song? I’ll let it speak for itself:

First of all, I think it’s pretty ballsy that a man with over 100 tattoos would say that he’s a “pretty boy.” Plus, he sounds like he has serious breathing problems during the chorus. Every time I hear this song I think about how many diamonds they could encrust on an inhaler.

Second, did everyone notice the product placement? At least twice, there’s a closeup of Soulja Boy’s face wearing Dr. Dre’s Beats headphones. For what it’s worth, Dr. Dre is one of the few mainstream rappers who has publicly stated he supports what Soulja Boy does. Maybe it’s because Dre wants to make an obscene amount of money off of Soulja Boy’s sponsorship of his product.

6. The song “Crank Dat,” and the accompanying dance.

The music video for “Crank Dat” unintentionally addresses head-on the growing conflict of younger audiences being attracted to more mature programming. It begins with two kids dancing in front of their dad and singing a censored version of the lyrics together. It would be slightly more heartwarming if the song didn’t have lyrics like this:

“Folk, I see you tryna do it like me
Man that damn was ugly”

“Damn” is not a noun you ingrate.  I won’t show you the actual music video, mostly because I’m sick of seeing that guy wearing a Superman costume with the Superman logo blurred out. Instead, we’ll look at the best animated parodies of “Crank Dat.” First up, Stewie Griffin:

Next, Alvin and the Chipmunks:

And finally, Dora the Explorer: