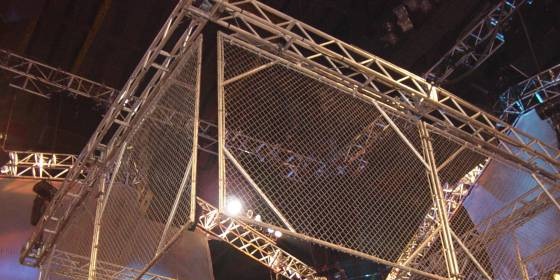 When in doubt, put a cage around it.

The gimmick match is what gives professional wrestling its spectacle and wonder. Sure, you could watch two muscle-heads knock each other around without wacky, nonsensical rules, but wouldn’t you rather watch them try to escape from a cage? Seal each other in a casket? Set one another on fire? Or just straight-up stab each other with broken bits of glass? Exactly.

But sadly, not all gimmick matches are fun to watch. Finding the proper balance of stupid rules and dangerous stunts is hard work, and these six examples prove it’s a lot easier to miss the mark than to smack one out of the park.

Catch as Catch Can Match

At Souled Out 2000, mid-carder Billy Kidman squared off against mid-carder and vest enthusiast Dean Malenko in WCW's first (and only) Catch-as-Catch Can match. The stipulations were simple enough: the first person whose feet touched the arena floor would lose. It was based somewhat loosely on old carnival style wrestling. Also, vests.

Fans weren't expecting much since it was the opening match and neither of the participants were wearing nWo shirts or corpse paint, but they did expect something. Naturally they were disappointed.

If you don't have the two minutes to spare, we'll summarize: before the match even had a chance to to really begin, Malenko left the ring. Keep in mind that this was a match where the only rule you really had to remember was that you couldn't leave the ring. That rule, once spoken, shouldn't be easily forgotten. It's comparable to the “cover your genitals while in public” rule society imposes on us all. At no point during the match was Malenko's junk visible, so we'll just have to chalk this up to absentmindedness and not daring rebellion.

1995 was really WCW's golden year. With Eric Bishoff going through Ted Turner's money faster that he could actually burn said money, believability and the idea of kayfabe were cast aside in favor of never-ending gimmickry. For evidence of this look no further than the monster truck sumo match at Halloween Havoc.

Hulk Hogan and The Giant were set to main event the night fighting it out for the World Heavyweight Championship, but earlier in the night they met in a Sumo Monster Truck Match on top of Cobo Hall. Both men drove custom-built monster trucks with the sole purpose of pushing the other truck out of a circle. There was literally nothing at stake during the match and it probably cost more money than Ted Turner would care to remember.

Hogan won, but the fight continued after they both left their trucks, ultimately ending with Hogan accidentally knocking The Giant off the roof and into a river below. The commentators went out of their way to assure us that The Giant was most likely dead, so it shouldn't have been at all surprising when The Giant walked back into the arena without any explanation at all.

To capitalize on the mainstream acceptance of hardcore wrestling, WCW staged the Hardcore Junkyard Invitational at Bash at the Beach 1999. The audience was told that the match was unsanctioned and thus there was no way of telling who would show up. Combatants were to enter a junkyard surrounded by a fence and could only win by climbing said fence and escaping. However, the match itself wasn't advertised on the event card at all, meaning that anyone who would have an active interest in watching something like that had no idea it was going to happen in the first place.

The match involved fourteen mid-carders and jobbers, not that actual identities mattered; the match was shot at night and lit by a roaming helicopter, giving audiences both the feel and clarity of watching live prison break footage. But because watching several vaguely human looking shapes fight in the shadows isn't enough of a spectacle, several props were rigged to explode at different times. Why? Because wrestling, that's why.

The winner was Fit Finlay, who only escaped after triggering an explosion and creating a wall of fire to block the other inmates and their own attempts to flee. Despite all the special effects making it look more fake than usual, many of the participants were legitimately injured by the end, some getting shelved for weeks after.

As bad as things may have seemed for WCW in the mid '90s, it was just as bad (if not less expensive) from the WWE's end. Before the "Attitude Era" and a much more liberal use of folding chairs, the WWE was still geared towards a much younger, safer crowd, and it really showed in their gimmicks. Case in point, The Godwins. We were told that The Godwins were pig farmers from Arkansas, which somehow made them evil. They found themselves aligned with the "Million Dollar Man" Ted DiBiase, a man who had no logical need for pigs or farmers but had the misfortune of drawing the short straw anyway. But glaring holes in logic aside, the worst thing about The Godwins was easily their “specialty” match, the Arkansas Hog Pen Match.

It was just like a regular wrestling match with the added win condition of throwing the other guy into a pig pen. In other words, it was a normal wrestling match that would end in a really stupid way. This was apparently dangerous, more so than a stack of burning tables, and thus The Godwins only participated in it once, at In Your House 1996.

A strap match is when two competitors are tied together, usually at the wrist, and the win condition involves touching all four corners of the ring in a certain order. Now a Yappapi Indian strap match is more or less the same, give or take some Hulk Hogan and amnesia.

To kick things off, we started with this bewildering yet sexy promo from Hulkster to “Nature Boy” and future crime scene victim Ric Flair:

Keep in mind that this was the main event of Uncensored 2000, one of WCW's flagship events, yet Hogan couldn't explain it without it sounding like a dramatic courtroom re-enactment. So we get to the start of the match, which is actually the end of the another match: Hogan ran interference in the previous match only to have Flair follow shortly after with the strap in hand. SWERVE~!

What's left is fourteen minutes with more geriatric homo-eroticism than the average lemon party. It's pretty much every strap match in the history of forever up until the end. Remember how you can only win by touching all four turn buckles in sequence? Yeah, Hogan didn't.

In a move that would make Dean Malenko look like the head of MENSA, Hulk Hogan, a man widely recognized as the most popular wrestler on the face of this or any other planet, wins a strap match by pinning his opponent. Then, just because he'd like to remind the audience he couldn't give any less of a shit, he slaps the last turnbuckle after the bell.

This article may seem unfairly loaded against WCW, but rest assured that the worst gimmick match in the history of professional wrestling was proudly produced by Vince McMahon at Unforgiven 1999: the Kennel from Hell match.

The match was the masterstroke of a feud between Al Snow and Big Boss Man. Boss Man had previously lost the Hardcore title to Snow, so he abducted Snow's dog and later served it to him under the guise of gourmet food. To get revenge, Snow concocted the Kennel from Hell, a steel cage placed inside a larger cell with vicious dogs running around between the two structures. The winner was whoever could escape both cages first.

This was a bad idea for two reasons. First, Big Boss Man had already proven that he had no issue with killing and possibly eating dogs. By surrounding him with dogs, Snow had done nothing but potentially boost his kill ratio. Second, you couldn't logistically use actual wild dogs and not expect someone to get brutally mauled, so the dogs were much tamer than advertised.

Despite the trainers' best efforts to rile up the beasts, the dogs spent much of their time shitting, pissing and humping. Folks at home barely caught a glimpse of them as the cameras were specifically focused on anything and everything else, but those in attendance were treated to what was quite literally the shittiest match ever.