Gadgets > Games > Skate With the T-Freestyle NW for Wii

Skate With the T-Freestyle NW for Wii

Thrustmaster has the ultimate Wii accessory for you gamers who are into skateboarding and snowboarding: The T-Freestyle NW for Nintendo Wii. Just like real boards, the T-Freestyle NW is made from genuine maple.  The board has the perfect combination of resistance and flexibility to give you the sense that you are really on a skateboard. As soon as I hooked up the T-Freestyle to my balance board on the Wii, the T-Freestyle made me feel like I was playing a new game each time.  I was switching from skateboard games like Tony Hawk to some of the snowboard games from the Wii and the T-Freestyle didn’t miss an ollie. 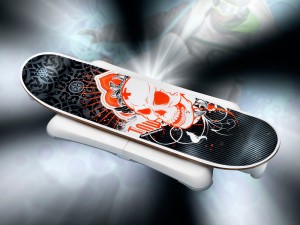 Instead of handing out some major cash on some other boards for the Wii, the T-Freestyle only costs $29.99. The design of the board is sick as well. It features a skull logo with some graffiti artwork that gives it the look of something you would see on the streets or the X-Games. Thrustmaster integrated the “rolling motion board” technology which produces true lateral movement capabilities just like in real life. Plus there is a “safety stopper” feature to prevent any risk of tipping over to keep you on your board and not in the hospital. 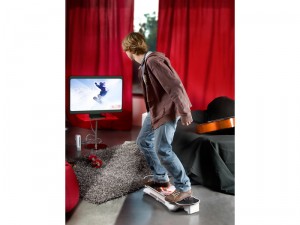 To get rolling on the T-Freestyle, all you have to do is hook it up the Wii balance board and you’re ready to skate or snowboard. If you are true fan of skateboarding and snowboarding games then check out the T-Freestyle. For half the price of other boards but still matching the quality of the expensive boards on the market you will make a wise investment. You can pick up the board at Amazon.com and get more details at www.thrustmaster.com.