By Jeffery Mitchell on January 5th, 2014 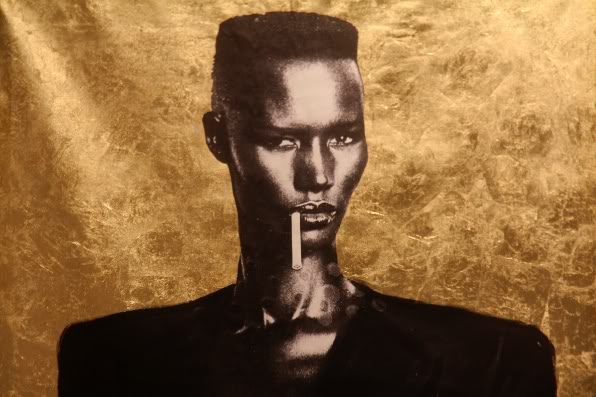 Grace Jones; a model, a musician, a complete lunatic…

Alas, many things can be said about this strong womanly lady, but somehow everything you could ever think to say about her is tidily summed up in the video for her major 1985 hit “Slave to the Rhythm.”

Though its approach and general effect have been noted as highly artistic, it’s still pretty mind-boggling to try to figure how the hell it ever ended up on television at all (especially in its own time) with the amount of completely crazy nudity it contains (seriously?!).

It should come as no surprise that we’ve decided to process and present this video for your twisted amusement. So without further ado; ladies and gentlemen, Miss Grace Jones:

This video begins aptly enough; with a razor blade. The blade in question is put to use slicing apart Miss Jones’s beautiful profile to make room for additional pieces to be pasted in at will.

The whole scene (mild as it may be) is bizarrely reminiscent of a self-documentary of a deranged stalker/serial killer, hacking away at faces and letters to concoct a chilling Valentine’s Day letter for the corpse in his freezer.

That disturbing image quickly evolves and we suddenly find ourselves on a roller coaster ride through that very stalker’s mind. Mind you, certain segments of the video may not be covered in full as we blithely leap from portion to portion on the rickety, convoluted mesh of lunacy that links together the many scenes that comprise this MESS. Nonetheless, you won’t have missed much by the end of the ride.

A hodgepodge of horror:

After a succession of various displays of human activity caught on film, we are presented with a scene featuring a topless man and woman drenched in un-matching paint with televisions on their heads.

Next up is an image that we can only describe as some sort of metaphoric testament to uncontrollable ejaculations followed by a collage of blissfully surprised-looking female faces and some *ahem* naked spanking (in other words, your grandfather’s sexual fantasy made reality).

Nudity, wine and cars (oh my!)

Bizarre images flash by before we’re confronted with a semi-nude woman posing as a risqué Olympic runner with a hot glue gun (?). Perhaps this is Grace herself as are the rest of the images that follow. 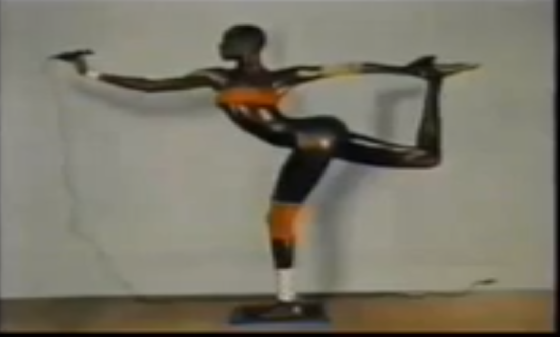 Then, like a knock out sucker punch in a dive bar on the wrong side of town, a naked woman (presumably Miss Jones) and her photo companion (a very naked man) take the stage with slightly askew berets and raised glasses of wine (looks like they were both just caught in the middle of a heavy roll-playing session gone wrong).

Things take a turn for the undeniably surreal as we witness a giant Grace Jones head protruding from the sandy surface of an unforgiving desert. The head turns and opens wide to allow a car to be driven out of it by the lady in question.

Just after that scene, some images crop up that are so random there’s not really much else to say about them. Then, out of nowhere we’re sucker punched again; this time with an image of a young girl lifting up her dress (an honest to goodness WTF?! moment if there ever was one).

Tears cascade from our eyes as tiny dancers flood the screen and Grace lets out an inaudible shriek through a microphone with an accordion in her lap. An image follows of a young girl clutching a cup with liquid exploding out of it and falling into another cup that she’s deftly balancing on her backside. 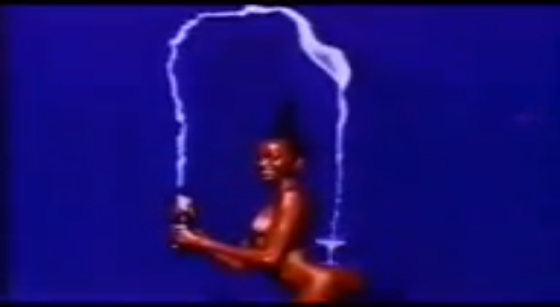 The metaphorical roller coaster we began our journey through this video in has long since taken a nose dive off a bottomless cliff and the subsequent images of a topless woman sticking her head in a cannon seem almost commonplace at this point (or perhaps symbolic of what we’d all like to do to ourselves to end the torture of viewing this crap).

Thus, instead of describing the myriad disturbing images that follow we’ll just mention them in passing and skip right to the end where Grace shoots herself in the head.

Yep, she shot herself in the head.

Fun Fact: Grace Jones’s album “slave to the rhythm” was written by Bruce Woolley, Simon Darlow, Stephen Lipson and Trevor Horn and was originally intended to be used as a follow-up album for “Frankie Goes to Hollywood” after “Relax.” For some reason, it was given to Grace instead.