Christopher Howard Wolf, a.k.a. “Slimebeast” is one of the biggest names in the online horror community that creates short horror stories called “creepypastas.” His stories have been read hundreds of times for internet videos that have netted hundreds of thousands of views, allowing him to reach an audience of millions. But instead of pigeonholing him, we’d like to share with our audience that he has also written several comic books and is involved in various forms of web media. But don’t just take our word for it.

Let’s start off by talking about your Nosferatu comic, which is an update of the classic 1922 vampire film. What drew you to the write the project?

That was a lot of fun to write. Basically, I had been pitching comic ideas to Viper Comics, who I had been working with a bit. Nothing really stuck until I started thinking about modern ‘adaptations’ of classic material. Prequels and sequels and relaunches. I approached Viper with the idea of modernizing Nosferatu in a way that would both update the concept and poke a bit of fun at certain tropes.

In what way is the story an update of the classic?

All in all, what people seemed to notice the most was the change of protagonists. The young couple of Thomas and Ellen Hutter (as named in the original Nosferatu film, later changed to match the Dracula novel) became Tommy and Elle, a same-sex couple. Really, though, that didn’t change much in terms of the overall story, it was more of a natural shift I felt should be taken. The bigger changes, to me, were combining several characters into “Agent Bullner” and setting the whole thing in present day. The former seemed to move things along in a clean way… Bullner is after the Nosferatu, and gets to explain things to us for the most part. Always nice to have that sort of guy around.

How’s the feedback on that been so far?

Feedback was almost universally positive. Some folks thought it was too short, but I prefer to think of that just as people wishing there was more. It’s a nice thought.

You also have a new comic out called Love Monster. What can readers expect from that one?

“Love Monster” is about a girl by the name of Pearl. She really loves monsters, as you can guess from the title. So much so, in fact, that she hunts them down strictly to put the moves on them. It’s less about adult situations and more about comedic “Archie” style love triangles, however. Archie meets Jason Vorhees. Pearl’s best friend, Bob, is the stereotypical “friend-zoned” nice guy with ulterior motives, though he’s hiding a dark secret of his own.

What inspired the creation of Love Monster?

I had actually been talking with the illustrator on Nosferatu when he mentioned “loving” a certain monster. It got me thinking; what if that were literally true? What if someone well and truly “loved” monsters… in a “take them home to meet Daddy” sort of way.

Right now, you’re by far most famous online for your short, widely distributed horror stories. What got you interested in writing those?

I started when Bogleech.com held a Creepypasta Cook-Off. I had written plenty of stuff before that, but nothing I would really call “Creepypasta”. Just shorts about God appearing to someone as a broken toaster, an alien invasion from a housecat’s self-interested point of view, and so on. I was one of the folks who had seen Slenderman, and that was about it. When the contest was announced, and I looked into what exactly it was about, I saw the true depth of the abyss that is creepypasta.

What was the first one you ever wrote?

Funnymouth was the first story I wrote with the intention of posting it as a Pasta. It has some pretty strange formatting, taking the form of chat logs and email conversations. That was mostly because I didn’t exactly know how to write an effective “normal” CreepyPasta yet and wanted to think of a clever way to approach something I’d never tried… it seemed to work out for the best, anyway.

From what I understand, your biggest/break out story was the theme park horror tale Abandoned by Disney. What inspired that one?

For Abandoned by Disney, the inspiration came from a forum thread about Pastas that were only one sentence long. I fired off something about a “Negative Mickey Mouse” removing his head and revealing only blood. That sat for a few days and festered until I realized I had to see where I could go with that concept.

Why did you hate Disney so much?

I don’t necessarily hate Disney. I’m more of a playful adversary. Heh. They’ve done plenty of things I disagree with, but any corporation of that hulking size is going to cause some problems.

Someone did a pretty neat Mickey Mouse gas mask image based on the sequel, “Room Zero.” But I suppose the most interesting for this one was a shot of someone in a doorway, casting a Mickey Mouse shadow. I tend to prefer simplicity, which might seem odd to anyone who’s read my work. It’s really a tough call to choose from the batch of great things people have made.

Your other biggest story is probably Funnymouth, the story of a chatroom troll from hell. What inspired that one?

The word, “Funnymouth”, popped into my head. It just stuck and seemed like an interesting term for a creepypasta creature. In the end it inspired both his look and the way he “talks”. His speech is based on pretty much every forum-goer and chat room user who has no idea how to type. The “i hope u can like it” actually came from a specific fellow who would post his ideas on an obscure forum, hoping celebrities would somehow notice and produce them. “I hope Tom Cruise sees this and I hope he can like it.”

I understand that you did some unusual marketing for Funnymouth. If so, what was it?

A few years before I wrote the story, I had purchased the domain name “Bluud.com” from someone. I never really knew what to do with it until I started writing the story. For a few months after I posted it, you could actually go to the site and see Funnymouth. Unfortunately, I forgot to take the domain off of a sales site I had previously listed it on. Someone bought it after it became popular and the company it was listed with processed the entire deal immediately. In other words, if you want to see anything mentioned in the story, it’ll have to be at ReferSales.com

This image was the entirety of bludd.com. i hope u can like it.

Probably your third most popular one (going by how its been dramatically read on Youtube so much) is Super Mario World Creepypasta I HATE YOU, which people largely seem to not realize is a parody (or a “straight-faced joke” as you put it.) How does it feel to have so many readers miss the point? 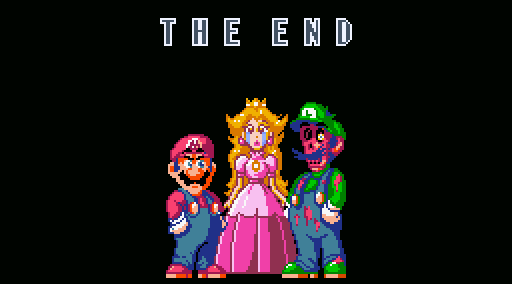 People took a story with illustrations like this seriously. Think about that.

It’s actually not bad to see folks just enjoying the story on the face of it. I don’t like to tell people how to view my work or what to think of it, so really if someone says it’s not a parody, then I say they’re just as right as anyone else. That said, I did go into it intending to ‘“hide” several tropes that are considered to be overused. Bleeding eyes, blood everywhere, references to other games, etc. There are plenty of mistakes thrown in as well, like things changing between screen shots. It’s all in good fun, and I guess if someone edited out the problems it wouldn’t be a parody after all! Right?

On a semi-related note, you got into a… “disagreement” with MrCreepypasta over his use of your work for his channel, which I understand he told his fans about to pester you and which allowed he and his partner company to walk away with thousands of dollars but the videos taken down. What’s the fallout from that been like?

That was a sad situation all-around. What a lot of folks don’t seem to realize is that YouTube “celebrities” that partner with YouTube and other corporations are not just average users. When they use content, it’s for a company. It’s for profit. I’m really dead set against copyright claims being leveled against people who sing a song or show a clip on YouTube. However, multi-million dollar companies and the folks who work with them don’t necessarily fall into that group. It’s tough when you’re a small-time creator, and you find someone selling your art on a t-shirt, in a book, or through advertisements placed on your material. It’s all the worse when you get tons of messages from folks asking why you’re trying to steal from the company by protecting your rights. Luckily, the whole thing has simmered down a lot and I don’t take random death threats seriously.

Moving on from Creepypasta, you shared credit with past interview subject Jonathan Wojcik for the game Don’t Get Spooked. What was your involvement with that?

All of the credit for that goes to Jonathan. I only learned about it later on, close to its release, when he sent me the link so I could check it out and see what he planned for my characters. (Funnymouth, and “Mikey Mice” which was based on my Disney stuff.) 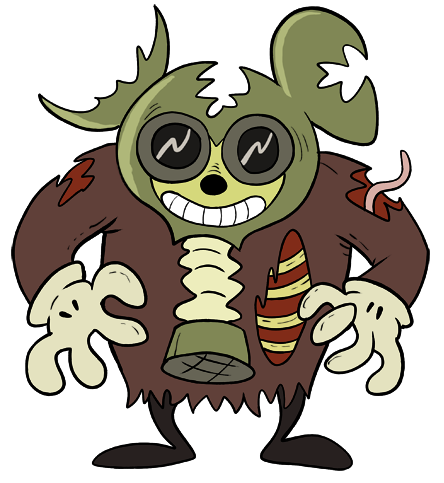 I’m not sure how much I can or should say, but there might be something similar in the future that I might be more involved in. We’ll see! I was more involved with Burgrr.com, a website based around “Harmburger”, one of the characters you’ll find in Don’t Get Spooked. I asked Mr. Wojcik if he’d be interested in making a fake fast-food website, and we both went crazy designing and writing it.

Of all the games you’ve worked on, what’s the one you’re happiest with?

I have a lot of nostalgia when it comes to “DragonSpires”, a game I worked on in the late ‘90s. It was very basic, with very little to do but explore and kill monsters, but it was also one of the first graphical multiplayer online games. I made some friends there that I still talk to today, even if they all seem to just want DragonSpires back online. Heh. The one I’m happiest with right now, however, would be “Hell Rising”, a browser-based text game with a few little graphics thrown in. Essentially, players get to be a Human, Vampire, or Zombie, and battle across a post-apocalyptic city. It launched in 2007, so I suppose it’s the longest running project I’ve worked on! Plus, I’ll always have a warm place in my heart for the undead.

Dustin Koski is the author of a horror story of his own called Please, God. he hopes u can like it.