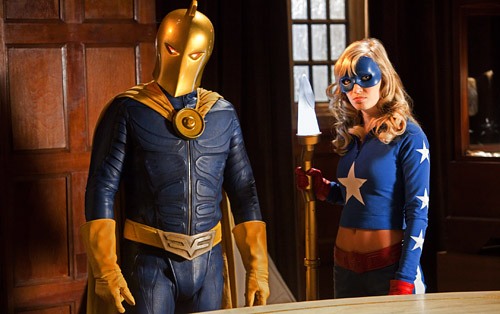 On February 5th, we’ll be treated to a rare and unique discovery, the unbroadcast and heretofore unknown sequel to the brilliant ’90s “Justice League America”, which can be seen in its entirety on YouTube, featuring the Justice Society of America.

“We’re very excited to broadcast this recent discovery” said a CW executive.  “Although the costumes and effects are obviously primitive by today’s standards, this TV movie still looks very, very good for its age.  We’re excited to tie this to the Smallville brand because let’s face it, the show’s sucked ever since Tom Welling turned 40, so we need all the quality we can get.”

Apparently Welling will be digitally inserted into the pilot footage.  This throwback to storytelling and effects from a decade ago airs February 5th.