Humor > Snakes at a Wedding

Snakes at a Wedding 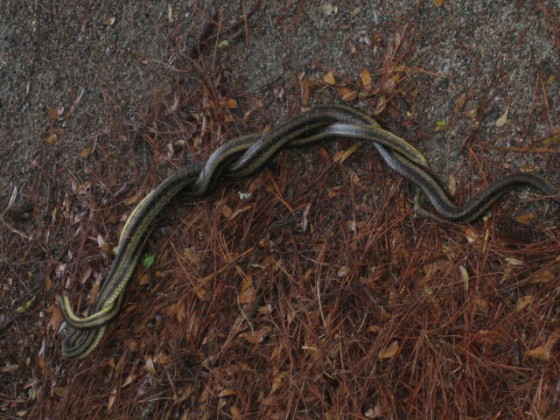 Unexpected guests showed up at my brother’s wedding this past weekend in Charleston, South Carolina. It was raining so the ceremony was held on the covered deck, with a tree right near the altar.

I don’t know what kind of snakes they were, but they stretched about six feet long and ignored my hooting and hollering. Guests crowded around, watching, and taking photos. This was much better than watching Animal Planet, and even they would’ve had to edit out some of the snakes’ antics to avoid FCC fines for airing obscene content.

Then the ceremony started. The snakes, oblivious to the seriousness of this sacred ritual, continued on with theirs. They remained in that tree, in front of more than 100 people, twisting around each other like braided bread. And before I knew it, Here comes the bride… but my eyes remained fixated on the snakes, and I stood there taking notes, getting some pointers as my brother and sister-in-law said “I do.” At one point, they (the snakes) fell off the tree, much like a drunk couple out of bed, and picked up on the ground where they left off.

Because I have every intention of upstaging my brother, I’ll be bringing bunnies to my wedding. 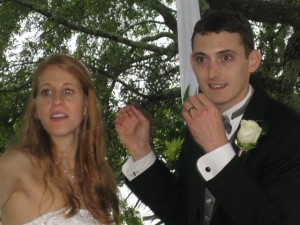 The bride and groom discuss the biblical significance of the snakes after the ceremony.