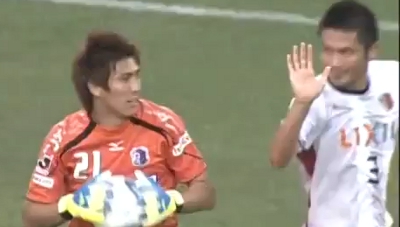 There’s no way anything bad can happen here.

It may not be the most beautiful goal you’ll ever see scored but what the below video features from the Japanese J-League is one incredibly intelligent player and one goalkeeper that probably should make it a habit of investigating his surroundings.

After collecting a cross, Kim calmly waited for his defenders to move forward, unaware that Tashiro was patiently waiting right behind him. As soon as Kim dropped the ball, thinking the coast was clear, Tashiro pounced, stole the ball, and buried it in an empty net. We aren’t sure what is more amazing, the fact Kim was completely unaware of a player behind him or that his teammates didn’t alert him of the impending danger. Either way, the end result is a fantastic goal that you rarely see.