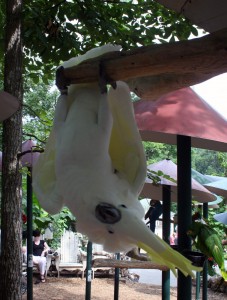 I’ll have to claim ignorance on this one, because until the recent Taco Bell viral video / commercial, I didn’t know who Snowball was. However, now that I am aware, I think I may have a problem and require professional help. If you haven’t yet met Snowball, he is a Medium Sulphur Crested Eleanora Cockatoo who has become a YouTube star, and has helped his current owner run a bird rescue service. The damn bird even has a wikipedia entry. The picture to the right is actually not snowball, it’s a photo I took of another Cockatoo on my recent vacation. The wife and I ventured to a place called Parrot Mountain (fabulous, 100’s of birds) and this little bastard swung upside down on his perch and stole my hat while I was taking a photo of another bird. So enough about my problems, here is Snowball in the recent Taco Bell piece:

So you may watch that, and wonder if its real. Well based on what I observed at Parrot Mountain, and the other videos of this bird, I have come to the conclusion that it is. Now they may have filmed this bird for an hour to get that 30 seconds worth of goodness, but I have no doubt it’s 100% real. Which brings us to the video in the title up above. Snowball’s latest video is a tribute to the late pedophile, Michael Jackson:

So how did Snowball become famous you may ask? Well it all started with this video of Snowball dancing to the Backstreet Boys (his favorite), which now has almost 3 Million views. So yeah, you can say I am a little late to the party on this one:

Here are a few more videos of Snowball doing his thing:

The people laughing and cheering ruined the last one a bit, but its pretty cool that the bird got on Letterman. To finish up, I’d like to share my vacation photos. We’ll start with slide carousel #1. Actually, I took a ton of photos of these birds, and I figured someone might have some kinda fetish. It’s virtually impossible to take a bad picture of these creatures, they are quite magnificent. I present to you, the Sexy Parrots of Tennessee: