In what has to be one of the most amazing finishes (or non-finishes) in recent NHL history, Mike Richards of the Philadelphia Flyers had the puck on his stick, in overtime, against the San Jose Sharks. Time winding down, game on the line. Richards shoots, the puck trickles by San Jose goalie Antero Niittymaki and it appears Richards would play the role of hero. 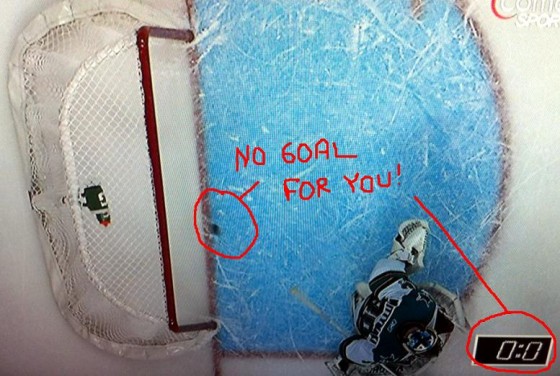 The puck failed to cross the goal line before the clock reached zero. Another tenth of a second, and the Flyers would have pulled out the win.

The best part about all of this is the Flyers were up 4-1 in the 3rd period. This is a game that shouldn’t have reached this point. The missed-by-thismuch non-goal in OT means the game went to a shootout and yep, you guessed it, the Flyers lost.

No word yet on whether Chris Pronger stole the official timekeeper.