There are several reasons to watch the new ABC sitcom ‘Modern Family’.  One, it’s hilarious.  Two, it stars Al Bundy.  And three, it very much takes up the mantle of best mockumentary focusing on an often dysfunctional family, a niche that’s been vacated since ‘Arrested Development’ was canceled.

But there’s another reason you should be watching ‘Modern Family’, and it’s one that you’ll probably care about more than any of that other crap we were just talking about.  That reason can be summed up in two words: Sofia Vergara.  Or as many like to call her, “Sofia Viagra.”

Vergara, the 37-year-old model from Colombia who nine out of ten dentists would agree is one of the sexiest women on the planet (fun fact: before breaking into modeling, Vergara studied Pre-Dentistry in college), plays Ed O’Neill’s new wife Gloria, because that’s totally plausible. 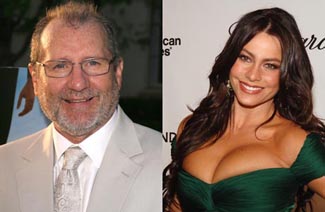 Maybe a little surprisingly, Vergara proves on the show that she’s not only sexy, but she’s got great comedic timing as well.  And she’s also one tough chick, having beaten thyroid cancer in 2002, and in 1998 her brother was murdered in a botched kidnapping attempt, prompting her to move her family to Miami so that she could pursue a career in showbiz and support them.

Throughout her short but still blossoming career in movies and television, Vergara has appeared in shows like ‘My Wife and Kids’, ‘Dirty Sexy Money’ and ‘The Knights of Prosperity’, as well as films such as ‘Four Brothers’, ‘Big Trouble’ and the cinematic classic ‘Soul Plane’.

And if you didn’t appreciate this Latin beauty before, well, feast your eyes on these pictures and we’re betting you’ll be tuning into ‘Modern Family’ when it airs on Wednesday night.