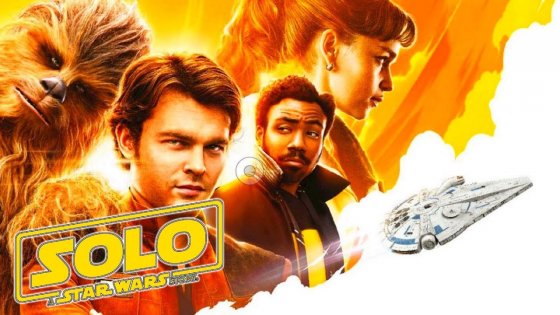 With Disney’s takeover of Lucasfilm, it was only a matter of time before we were inundated with an overload of all things Star Wars. No longer was it to be an every-three-year affair; new films in the canon were announced almost right after the starting gun went off. The wait between Star Wars trilogy films would be reduced, and there would be interstitial films in the intervening spaces, much like Disney floods the market with one or two Pixar films a year. 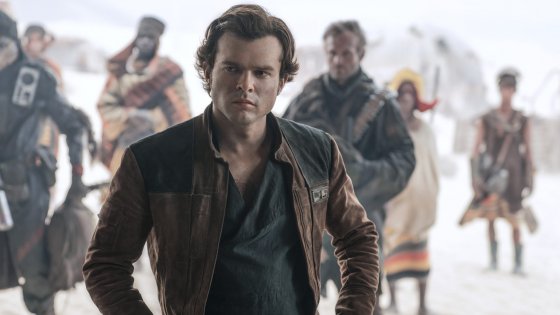 The over-saturation comes to a head with the wildly uneven Solo: A Star Wars Story. Unlike 2016’s pulse-pounding Rogue One: A Star Wars Story, Solo seems to be infected with characteristics of the other unchecked bull in Disney’s stable: Marvel movies. Han Solo, as played by Harrison Ford from 1977 to 2015, was a man whose life began and ended with whatever job or scheme he was undertaking at the time. The gallows humor and sarcasm spewing from his mouth came from constantly dealing with dangerous gangsters and smugglers, creating a disarming barrier capable of holding anyone at arm’s length, never willing to get personally invested and risk attachment. 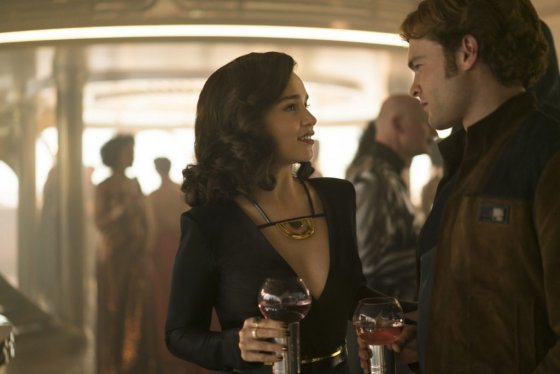 Solo tries to get at Han’s origins, but only scratches the surface instead of doing a deep dive into what makes the man. As directed clinically and to emotionless perfection by Ron Howard (with leftovers from original directors Phil Lord and Chris Miller), the film does exactly what Han (Alden Ehrenrich) does to keep himself alive: it keeps the viewer at a distance. We’re catapulted through Han’s life, from slave to Imperial soldier (don’t worry, it’s explained) to heist-pulling criminal genius. He’s a survivor, doing whatever he can to keep his neck from being separated from the rest of his body, even if it means leaving the love of his life Qi’ra (Emilia Clarke) behind on their home planet of Corellia during a botched escape attempt. 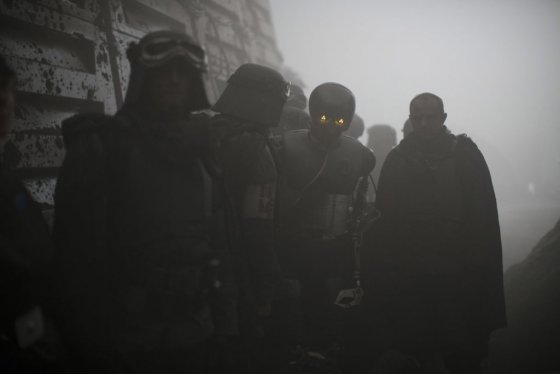 The film’s scattershot spirit evokes shades of Steven Soderbergh’s Ocean’s films, with little side-scams and frippery to pique your interest, all leading to the big score everyone’s anticipating. We’re shifted at hyperspeed between planets, jobs, and personnel, which gives no time to fully root ourselves in some of these characters. Big-name actors like Thandie Newton (currently seen in HBO’s “Westworld”) and Jon Favreau (the director of Iron Man in a too-forced-to-be-funny voice role) are summarily discarded in the film’s first act, paving the way for the more recognizable Lando Calrissian (Donald Glover) to join the fun. 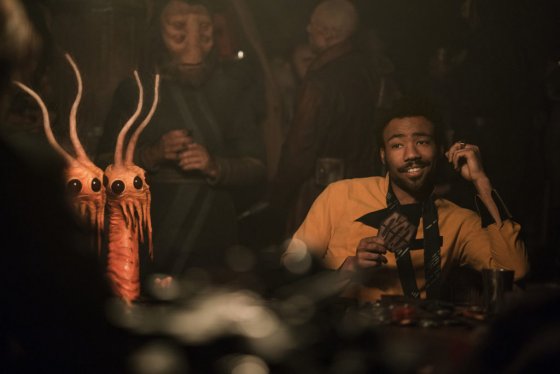 The magnetic, charismatic Glover steals the film out from under the one-note, one-smirk Ehrenrich, who seems to be more intent on copying the feel of Ford’s portrayal rather than reaching through to Han Solo’s true soul and spirit. Lando is a fully fleshed-out and delivered character, given rich life and personality. He even gets a more humorous and devoted love story – if you can call it a “love story” – than the perfunctory, shallow dyad of Han and Qi’ra. The small portion of the latter’s relationship exposed in the opening minutes feels more utilitarian than that of a lifetime spent surviving together. 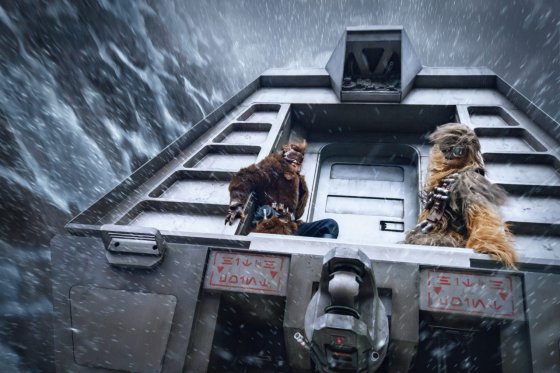 Quite frankly, the burgeoning friendship between Han and Chewbacca (Joonas Suotamo) is more edifying and substantive. Starting as opposites, these two quickly form a humorous and cooperative bond which lasts the rest of Han’s life; seeing them together on screen is probably the only good thing about Solo, as it provides the heart the rest of the film is so sorely lacking. Of course, we’re used to this friendship by now, but to see it in its infancy is something special, especially considering the circumstances of their first encounter. 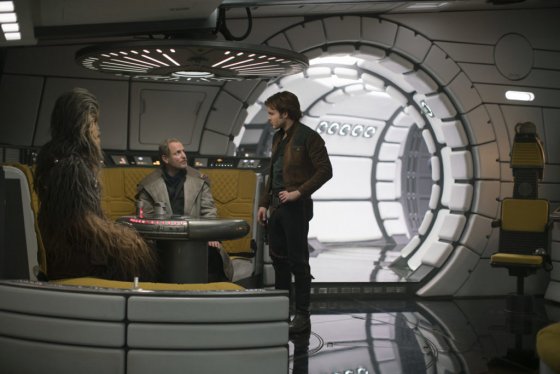 There’s no high, soul-searching arc Han is given; a scoundrel he was, and a scoundrel he always will be. And when his character suddenly must make a decision against his selfish nature, it means as much as the other characters who aren’t going to matter once the credits start rolling. It’s just as superficial as the rest of the film, and not even the big twist is going to be of any consequence once Rogue One and A New Hope come around in the timeline. The film tries to assign some semblance of importance to characters played by franchise-hoppers Paul Bettany (J.A.R.V.I.S. in the Marvel Cinematic Universe) and Woody Harrelson (The Hunger Games‘ Haymitch Abernathy), as well as everyone else who isn’t Han, Lando, or Chewbacca.

This disposable nature is Solo‘s biggest fault, and yet it is also its biggest asset; as we’re only meant to see the becoming of Han Solo, we can enjoy it without thinking forward to tying everything into bigger stories. It’s certainly nice to see Han moving through obstacles with the pompous, devil-may-care attitude which carries him handily through his existence in the Star Wars canon. We even see how it’s possible to make the Kessel run in less than 12 parsecs. (“GRRRRAAWWGG!” “Not if you round it down, buddy.”)

It’s these little things which make Solo worth the dead feeling you’ll have in your legs, no matter how comfortable the theater seats might be. Franchise stalwart Warwick Davis – having been in the Star Wars universe since he played Wicket in Return of the Jedi when he was 13 years old – makes a welcome appearance, as does a very familiar pair of dice. We also see a rather pristine Millennium Falcon, its sleek shape foreign to us because of the lack of Solo-wrought damage.

This entire portrayal of Han Solo is foreign, as it lacks the depth required to make us feel anything for the character. It’s a depth which is surely grasped at, and it might even be within the film’s reach at times. But any attempt at humanizing is met with the most rote and arch characterizations. Han’s continued professions of loyalty to Qi’ra – the constant “I was gonna come back for you!” speeches and the like – feel more like quips than genuine emotions due to Ehrenrich’s always-at-level-six delivery. Harrelson doesn’t fare much better having to play, yet again, the grizzled voice of experience to a young upstart; this same-ish role awaits you if you’re up for watching the totally enjoyable Zombieland. And as the love interest to our hero, Clarke swans through the film almost as if everything were going to her exact design, without a care in the world or for emoting a gripping performance. It’s more a fault inherent in the script rather than the actor, as she tries to make the most of what she’s given, but there’s only so much she can do before she becomes as null as the others. 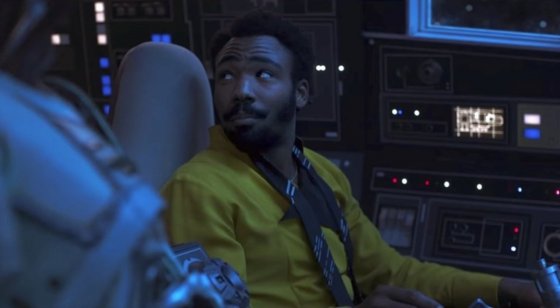 Which, then, leaves us with the two characters you find yourself getting behind the most: Lando and Chewbacca. For secondary characters who don’t have their name in the title, they serve well as the glue holding Solo together after you’re done not caring about everyone else. Suotamo imparts a physicality to Chewbacca we haven’t seen before, primarily due to this iteration of Chewbacca being a younger, more angry version of what we’ve seen for the last 41 years. Solo‘s action was choreographed by former Jackie Chan Stunt Team member Brad Allan, so you know you’re in good hands; as a result, seeing Chewbacca lay MMA-style smackdowns on his various opponents is a surprising treat. 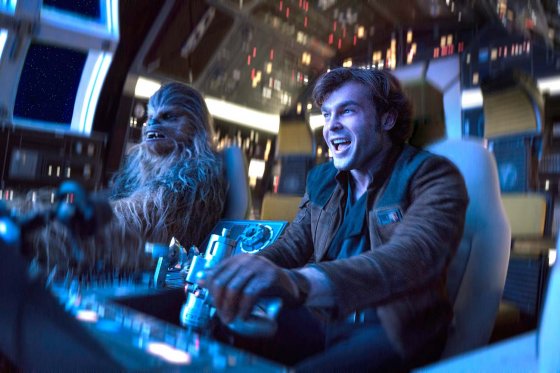 Solo winds up being one of those movies which spends its time either trying way too hard or not trying hard enough. Its tone is often as mismatched as Glover’s disappearing and reappearing Billy Dee Williams-esque accent, no doubt a result of the two directorial teams and the creative differences which resulted in Phil Lord and Chris Miller being let go from the project. The film runs the gamut between jokey (the rapport between Han and Chewie), serious (Bettany’s scarred, intemperate gangster villain), grave (Solo’s rival pirates and their backstory), lighthearted (Lando’s command of the Sabacc table), dashing (Han’s bravado and innate charm), and droll (Qi’ra). All of these tones push and pull at each other, thus making it hard to place your trust in Solo; the best you can do is strap in and enjoy the beginning of a beautiful friendship.

Solo spends its time either trying way too hard or not trying hard enough, with a mismatched, uneven tone and an utterly disposable nature.