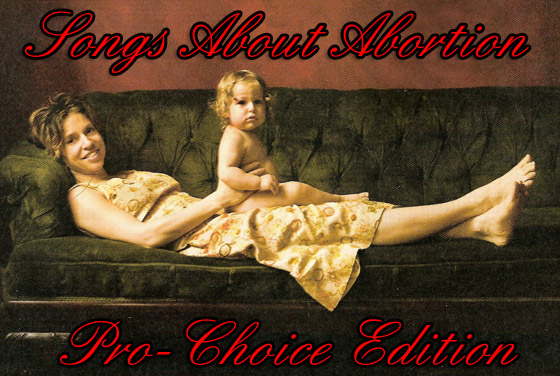 Unlike the list of pro-life songs, defining a pro-choice song is a bit trickier. A song about a woman who chooses to have her child can be a pro-choice song, but it’ll also be embraced by the pro-life movement because of the decision. So for this list, we’ll focus on anti- antiabortion songs, ones which clearly side with the pro-choice movement without pro-life sympathy (though several of these songs admit it’s a tough or sad decision). We’ll also include songs about the murder of abortion providers. Or, maybe we’ll just pick a bunch of good songs that are rumored to be about abortion since artists often make it difficult to understand exactly what they’re trying to say.

A note before we start. Madonna’s “Papa Don’t Preach” is perhaps one of the most famous songs in which the woman chooses to have her child. Therefore, it’s ineligible for this list. At the same time, it wasn’t included on the list of best pro-life songs because no one would mistake Madonna for a champion of their cause.

Also check out: Top Ten Celebrities Who Had Abortions

“Brick” by Ben Folds Five
Ben Folds tells about an abortion his girlfriend had during high school.

“Choir Girl” by Cold Chisel
A man tries to console his girlfriend prior to an abortion.

“December” by Frida Hyvönen
A woman goes to an abortion clinic with her boyfriend.

“F.D.K. (Fearless Doctor Killers)” by Mudhoney
This song condemns those who use violence against doctors.

“Get Your Gunn” by Marilyn Manson
Manson’s take on the 1993 murder of abortion provider Dr. David Gunn.

“Giving You Back” by Robyn
Robyn’s song about her abortion.

“Hello Birmingham” by Ani DiFranco
Of course there is an Ani DiFranco song on this list. This is her take on the 1998 bombing of an abortion clinic in Birmingham, Alabama.

“I Blew Up the Clinic Real Good” by Steve Taylor
Abortions = fewer youngsters, which ultimately hurts the ice cream man business. So Steven Taylor blew up the clinic.

“KKKill the Fetus” by Esham
Here’s a lovely song which encourages drug addicted pregnant women to have abortions.

“La Femme Fétal” by Digable Planets
Here’s a rap song in which the singer gives reasons why he thinks access to abortion should be legal.

I keep floating down the river but the ocean never comes / Since the operation I heard you’re breathing just for one / Now everything is imaginary, especially what you love / You left another message said it’s done / It’s done.

“Mandy Goes to Med School” by The Dresden Dolls
Amanda Palmer imagines herself and bandmate Brian Viglione as back alley abortionists.

“My Story” by Jean Grae
A song about Grae’s abortion at age 16.

“Nude as the News” by Cat Power
A song about Chan Marshall’s abortion at the age of 20.

“Slide” by The Goo Goo Dolls
I still don’t believe this song is about abortion-or-marriage, but the singer insists it is.

Mary got pregnant from a kid named Tom that said he was in love
He said, “Don’t worry about a thing, baby doll
I’m the man you’ve been dreaming of.”
But 3 months later he say he won’t date her or return her calls
And she swear, “God damn, if I find that man I’m cuttin’ off his balls.”
And then she heads for the clinic and
she gets some static walking through the door
They call her a killer, and they call her a sinner
And they call her a whore
God forbid you ever had to walk a mile in her shoes
‘Cause then you really might know what it’s like to have to choose

“When Under Ether” by PJ Harvey
This song is interpreted as being about a woman undergoing an abortion.

“Chotee” by Bif Naked
Bif Naked’s song about an abortion she had at 18.

“Die of Shame” by Tilt
A woman who dies giving herself an abortion because she is too ashamed to talk to her parents and her state has a parental consent law.

“Judge’s Chair” by Peggy Seeger
A song about unsafe abortion that Seeger wrote for NARAL. It was not well-received by the organization.

“Nine-Month Blues” by Peggy Seeger
A song about how failed contraception leads to unintended pregnancy. Seeger was commissioned to write it by the National Abortion Committee in 1975.

“L’Annonciation” by Mylène Farmer
A 1985 song about an abortion after a rape.

“Rapid City, South Dakota” by Kinky Friedman
A song which Friedman has described as, “The only pro-choice country song.”

“Samantha (What You Gonna Do?)” by Cellarful of Noise
A song about a pregnant schoolgirl struggling over whether or not to keep her appointment for an abortion.

“Superman” by Marry Me Jane
A song about the thoughts a woman has after an abortion, wondering if her child would have been “Superman,” “an idiot,” etc.