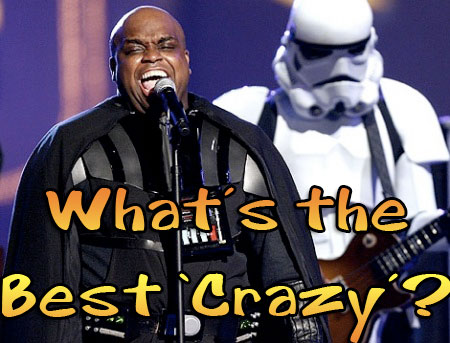 No singer has a complete catalog of songs without one that has the word “Crazy” in the title. And since a search for songs with Crazy in the title yields a billion results, we’ll narrow it down to songs simply titled “Crazy,” which rules out Beyonce’s “Crazy in Love,” for instance. The new search result yields roughly a million hits. Since that is still too many, we’ll focus on the most popular ones according to iTunes, minus the ones that suck, meaning there is a grand total of four. VOTE ON YOUR FAVORITE AT THE BOTTOM.

Yeah, Willie Nelson wrote it, but Patsy made it popular. This also happens to be the favorite song of my deceased grandfather. Shortly before he died, we cheered him up by playing this song. Personally, I think the song sucks, but it was great seeing my grandfather stand up and drift off into musical la-la land when it played, much like I do with Iron Maiden. So, if old people like it this much, then I know that Patsy’s “Crazy” really, really means something.

Almost 19 years after this song came out, I learned that Seal’s “Crazy” was not called “We’re Never Gonna Survive.” I promptly bought it on Amazon and have been playing it nonstop, then came up with the idea for this article (that’s an example of how bloggers come up with their ideas – it’s not always about ripping off someone else!).

As a huge Aerosmith fan, I’ve never understood the allure of this song, yet it became a hit. Then again, it seemed like every song off of Get a Grip became a hit. But I need to include it here due to its popularity and it’s the only “Crazy” sung by a hard rock band that is worth mentioning.

One of the weirdest and popular bands today, Gnarls Barkley had a runaway hit with their “Crazy.” Makes me wonder if people today will lose themselves in this song 50 years from now like they do with Patsy.