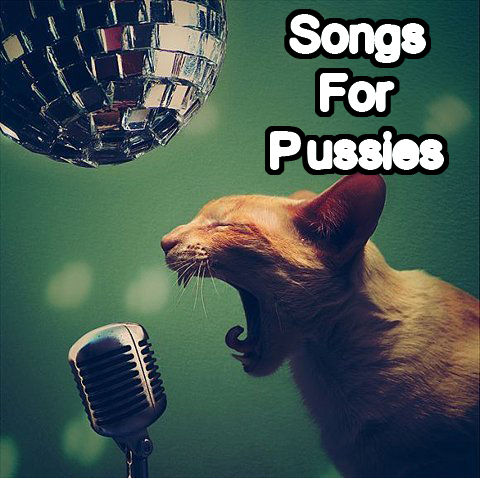 I hate cats. I mean I really, really hate cats. As far as I’m concerned every cat on earth can be booted into the bowels of Hell. It wouldn’t bother me one bit. Cats are the demonic spawn of the Devil himself and should be tortured and drowned in the flaming cesspools of the abyss. But I digress… I also happen to be highly allergic to them and I’m pretty sure they know it since any time I’m in the immediate vicinity of one, they seem to hone in on my face and eyes, demanding to be petted and loved. Damn cats…

Anyway, though cats might very well be succubi incarnate, they do make great subjects for some pretty cool songs. And there just so happens to be a metric ton of them floating around. So I had to make some kind of decision as to what went into the list and what stayed out. I figured might as well use tunes with the word “cat” in the title. That made sense. So that left what? Should the song actually be about felines? Should the song just sort of imply there might be a cat in there somewhere? Yes and yes.

So here ya go: songs with “cat” in the title that have maybe, possibly something to do with actual animals. Either way, they’re all pretty cool and they’re all rock ‘n’ roll. None of that rap bullshit or pop crap; just straight up rock. Except for the Muppet song. That one’s just cool. Okay, on with the twelve.

Al Stewart – Year of the Cat

This song, in 1976, became Al’s first and biggest U.S. hit topping at number 8. Though not specifically about cats, it is, “a story about a tourist who meets a hippie girl in an exotic Moroccan market, stays the night with her, and thus misses his tour bus.” It also features some amazing jazz-influenced instrumental breaks.

Released in 1981, The Stray Cats had a hit with “Stray Cat Strut” that reached number 3 on the Billboard Hot 100. The song itself is sort of an allegory about a ‘cool cat’ that may or may not actually be a real cat, considering there is a lyric about eating out of a garbage can.

First released live in ’89 on Suck on This, then in ’91 on Sailing the Seas of Cheese, Primus’ “Tommy the Cat” is a song about an actual cat (probably). The lyrics themselves imply that Tommy is quite possibly one of the coolest cats in Omalley’s Alley. Tom Waits supplies the voice of Tommy on the album and in the video, though Les does it live.

“Cat scratch disease (CSD) (also known as “Cat scratch fever”, “Inoculation lymphoreticulosis”, and “Subacute regional lymphadenitis”) is a usually benign infectious disease caused by the intracellular bacterium Bartonella. It is most commonly found in children following a scratch or bite from a cat by about one to two weeks.” Probably not what this song is about.

From the 1968 album Beggar’s Banquet, “Stray Cat Blues” is an homage to The Velvet Underground’s “Heroin” and is told from the perspective of a man lusting after and having sex with a 15-year-old groupie, reasoning that “it’s no hanging matter, it’s no capital crime.”

In 1969 on what was to be the final album by the original line-up, We Are The Village Green Preservation Society, the Kinks’ tune “Phenomenal Cat” tells the tale of a childhood fantasy in a decidedly Pink Floyd style.

Muppet Show – The Cat Came Back

“The Cat Came Back” (1893) is one of those nursery-rhyme style tunes more known for its run as a kiddie song than for much else. But when left in the capable hands (get it?) of Henson and his Muppets, it takes on a whole new life.

MUD – The Cat Crept In

The song “The Cat Crept In” is featured on MUD’s 1974 album MUD Rock that managed to reach number 8 in the UK. Though not nearly as popular here, MUD has become one of England’s strongest draws of the ’70s. As for the song… well, I’m not entirely sure what’s going on there.

From the ’94 release Turn it Upside Down, the song is actually about a cat that belonged (probably) to the Queen of the Nile. Other than that, Wikipedia is surprisingly lacking in facts.

Tom Jones is a stone cold pimp and this vaguely, thinly-veiled, innuendo-filled tune just proves it. If you can’t figure out what’s going on in this song just by listening to the lyrics, then you are a virgin living on a deserted island. Good luck with life.

The Jerry Garcia Band – Cats Under the Stars

From Wikipedia: “Cats Under the Stars, released in 1978, is the first and only studio release under the name Jerry Garcia Band and Garcia’s first album on the Arista label. Garcia, in the years before his death in 1995, considered this album to be his favorite.” Probably not about actual cats.

The Aristocats – Everybody Wants to be a Cat

Seriously? This is the only song on here that is by cats, for cats, about cats, and titled with “Cats.” ‘Nuff said.