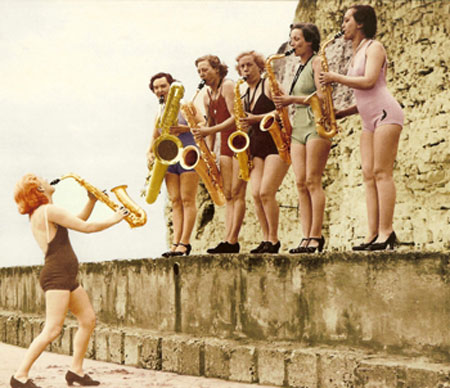 Ya wanna know what really makes a song sexy? No, not the sultry trollop Auto-Tuning the words. No, not the scantily clad girl group gyrating like a bunch of horny ostriches. And no, not the lyrics proclaiming their desire to be all up ons, or all up ins your anything. No, what makes songs uber-sexy with sex dripping all over it sexy sexiness is the saxophone. Trust me. If you ever hear a song that makes you go, “Wow, this song has just about all the sexy sexiness it can take… it’s got a sax somewhere, right?” The chances are very good that it has a sax. Possibly even two. Sax’s are sexy and here’s eleven of ’em for ya. You’re welcome.

I’m fairly certain that not only was (and is) George Michael a prancing rainbow fairy, but so is (was) Andrew Ridgely. Yeah, that’s the other guy. But either way, that sax solo is oozing with sex.

If you weren’t a Duran Duran fan just for a little while as a youth, then you are a big fat liar. A big fat liar who, apparently, doesn’t love sexy, sexy sax. So sexy.

The ’80s seem to have been lousy with songs with a short sax riff smack in the middle of them… and this one is no exception. Is it sexy? You be the judge.

Glenn Frey – “You Belong to the City”

Put this sexy sax song on and close your eyes. If it doesn’t remind you of every ’80s cop movie, you didn’t watch enough ’80s cop movies. Sure it’s from Miami Vice, but I can almost feel an Eddie Murphy/Mel Gibson flick in here.

Eddie Money – “I Wanna Go Back”

Many of Eddie’s songs featured a sax riff or two. This one just happens to be my favorite, so here it is in all its sexy sax glory.

Good flick, but what’s the deal with Arthur falling for Liza Minnelli? She looks like something that ought to be hiding under your bed. Anyway, awesome sax.

Foreigner rocked pretty hard for a good long time. They also happen to be one of those bands that never really knew when to call it a day. I wonder if that ‘sax guy’ in the back there still tours with them? Sax.

Not only are there some amazing key changes in this song — Frankie and the boys had mad talent — but there is a killer sexy sax moment in the middle that’s pretty sexy. The beginning of the song has a small one, but Dick Clark kinda talks over it.

These Aussies even went so far as to incorporate their sexy sax into the actual chorus! It’s all over the place! Even if it is only five notes. Five sexy notes.