There’s a realness to Disney/Pixar’s Soul that rises above its animation, music, and script. It has a life, vibrancy, and urgency which recalls shades of Inside Out, a similar story where two beings must work together to find home, but Soul takes a different path. Here, writer Mike Jones and co-directors/writers Pete Docter and Kemp Powers unite concepts of spirit, purpose, and meaning into a cohesive, transcendent work of art. It’s art that doesn’t simply cater to its young audience, nor does it dumb its language down for the lowest common denominator. Soul accomplishes this by engaging its viewers with a question that thinkers have been agonizing over for thousands of years: “Why are we here?” 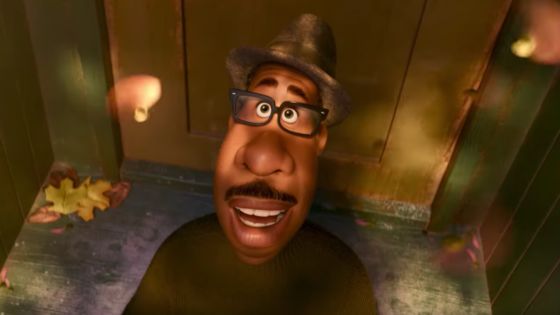 Yes, it’s a staple of many a Pixar movie, from Toy Story to Brave to Coco and on down the line, which brings us to Soul. The entirety of it seems culled from prior Pixar stories – a bridging of the real and spirit worlds, the “This is what you were born to do” motif, mistaken or switched identities, and the finding of misplaced talismans – but it does so with verve, style, and attitude tailor-made for this film. Soul features an astoundingly unique merger of vision and sound, as opposite as they can be while still maintaining a natural-feeling symbiosis. 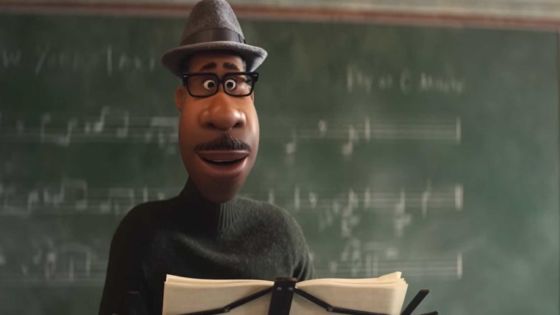 It starts with the animation, with real-world tones, colors, and shapes. Not a hair is out of place (until someone’s hair is literally forced to be) and not one false exaggeration is used to show musician/high school band teacher Joe Gardner’s (Jamie Foxx) life. Joe’s story is familiar, being a truly gifted yet undiscovered talent stuck in a job he tolerates for the paycheck, and he plays the piano like it’s a natural extension of his being. The animators have taken great pains to make sure every key he plays is correctly matched to the corresponding note, as well as other the other players shown with trombones, guitars, or other instruments. We’re made to believe in Joe’s world, and it’s not out of the realm of reason to believe he’d also have his head so stuck in the clouds over a chance at a dream gig that he’d walk straight into oncoming traffic… or, as it happens, an uncovered manhole. 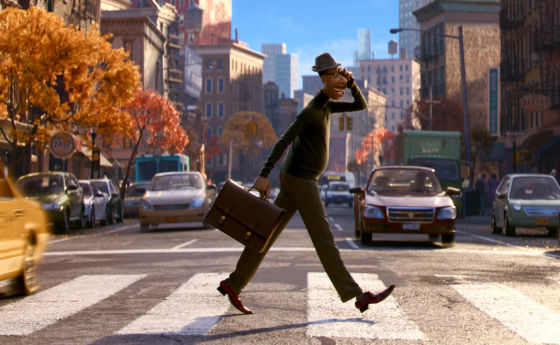 We’re abruptly slammed straight into seeing Joe as a discorporated soul, standing on a moving walkway heading toward a giant light. His body is more rounded into a featureless anthropomorphic shape which still bears his hat and glasses, and he still sounds like himself, but he’s more or less an ethereally-colored blob surrounded by similar folks on their way to The Great Beyond. Fighting like mad to get back to his body (glimpsed in a faraway portal), he steals away to The Great Before, where little baby-like soul-blobs are waiting their turn to be sent to Earth, watched over by a team of spirit counselors animated in an abstract, Pablo Picasso-type manner which gives them form, but allows them a freedom of movement and being unlike anything we’ve ever seen.

The only thing keeping all of these babies in this calm, unthreatening landscape is the completion of their multi-part badges, contingent upon each soul finding its spark, the thing which is going to inspire the entirety of their lives. The notion that all the pre-birth souls of every human in the world are together in one place hails from the Jewish mythological Guf, or the Treasury of Souls. (Does anyone remember the Demi Moore film The Seventh Sign?) And Joe has to find a willing soul to trade places with him so he can go through the portal and get back in time for his shot at greatness; that soul is 22 (Tina Fey), a punky brat who’s defied and confounded every last one of her counselors. 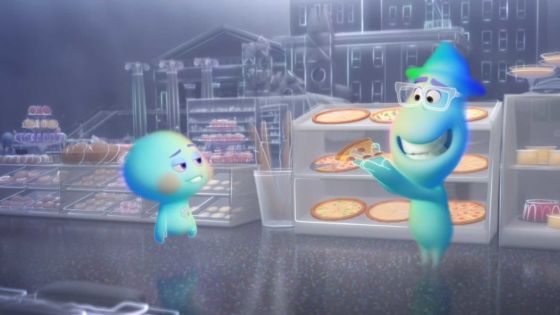 The cacophony of Earth – music, traffic, voices, everyday life – are sharply contrasted by the placidness of The Great Before and Beyond, augmented by stirring yet calming music by Trent Reznor and Atticus Ross. Reznor and Ross’ electronic textures and soundscapes define this space with a dichotomous mix of pointed authority and quiet solitude, and it’s a perfect match for the visual treats of both sides of The Great. It’s inexplicable how much magic their score lends to these scenes, bordering on crossing the line between incorporeal and corporeal with the resonance of each note and each musical phrase. This isn’t day spa music you’d hear while you’re getting a hot stone treatment or a facial; there’s a subtle urgency underpinning their movements, yet it’s not enough to throw us into any other space than “just right.” 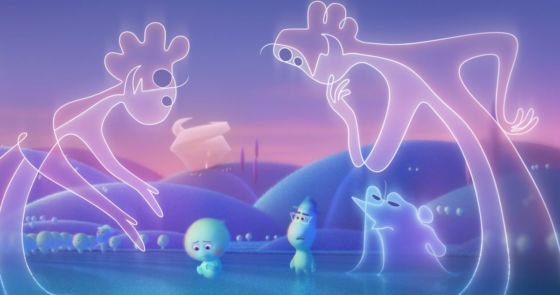 As the yin to Reznor and Ross’ yang, Jonathan Baptiste’s jazz compositions are full of skillful improvisation, going into uncharted territory in the face of Reznor and Ross’ seemingly mapped-out foundations. While the obvious comparisons between their musical angles are apparent, neither gets in the way of the other, working as one to fully support Joe’s travails through his life on Earth and in the ether. Baptiste swings between soft, piano-driven songs and big band-type arrangements with a facility reserved for the practiced and the well-traveled, and he nails his contributions with mastery and depth. 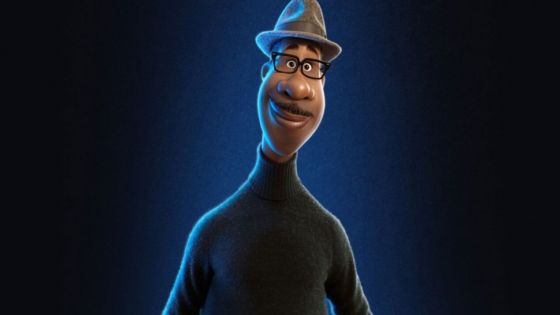 As usual, the voice cast fits their onscreen representations beautifully. Jamie Foxx strikes the right balance for the driven yet disheartened Joe, a man caught between what his soul tells him to do versus what the world tells him he should be doing. He also imbues Joe with a little cockiness, but it’s an earned cockiness that threatens to go towards the egomaniacal, and Foxx has the confidence to carry the weight of all of these nuances. Matching him beat for beat is Tina Fey, whose patented snark and sass gives 22 an unparalleled brightness and a devilish sense of mischief. As little as 22 looks, we can believe every word coming out of her mouth when it comes to what she believes her own life to be as a pre-birth soul. She loves dancing intellectual, solipsistic, and somewhat nihilistic circles around everyone she meets, and with each ream of dialogue, we’re dazzled by Fey’s nimble phrasings and punctilious delivery. (As well we should – she helped write her character’s dialogue.)

Side characters are also just as noteworthy, each throwing their lot in to make Soul a joyful celebration of what it means to be human. There’s a just-right quality which Phylicia Rashad, Alice Braga, Angela Bassett, and Rachel House give so willingly to their characters that makes us hang on their every word. Each of them gives a pitch-perfect, honest, and character-appropriate earnestness and candor, whether they’re voicing a line drawing or a fully-fleshed out human with grounded emotions and exasperations. There is no aspect of each character and their voice that doesn’t fit seamlessly, with the filmmakers seeking out what’s needed versus what’s hot. Docter and Kemp could have gone the easy route and gotten above-the-title talent who might be bigger box office draws, but they’ve dug deeper to get at the heart of each character and consolidated a wealth of actors who truly support their characters and make them mean more than just a name. 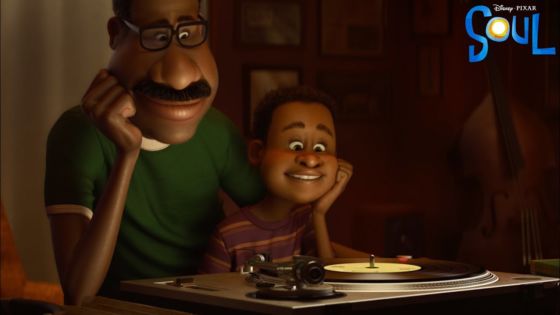 However, all of this takes a backseat to the universal questions and answers this film poses. Are we all born with our purpose? And are we just one chance, one breath away from fulfilling said purpose, a preordained destiny as nebulous as the changing of the winds? Soul doesn’t take this lightly, and we’re gifted a gorgeous “what if” exploring these ideas and, perhaps, considering another side of what goes into being human. All sorts of philosophical and religious leanings are incorporated to make us think about why we’re here and why we do what we do. In a time of social and personal unrest, Soul brings us back to square one, to make us remember where we come from and where we’re going, and how we can find our own meaning in the time between.