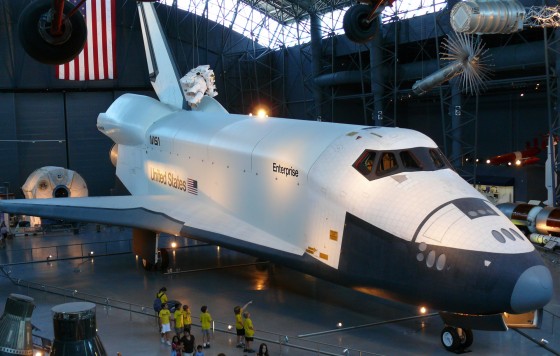 The Space Shuttle is scheduled to embark on its final voyage this morning (weather permitting). This video does a nice job of recapping the Shuttle situation briefly from a European perspective :

I have never seen a launch in person, but I have visited a retired Shuttle, the Enterprise, at the Air and Space Museum on multiple occasions. The Steven F. Udvar-Hazy Center near Washington Dulles International Airport is the companion facility to the Museum on the National Mall. The James S. McDonnell Space Hangar opened in November 2004 and displays hundreds of famous spacecraft, rockets, satellites and space-related small artifacts. The centerpiece of the space hangar is the Space Shuttle Enterprise. The thing I was struck by the most is the size of the shuttle, which honestly looks rather small on television. Below are a few of the photos that I took, during one of my visits :

For more on the Shuttle program, check out this great (2 hour) video from NASA :