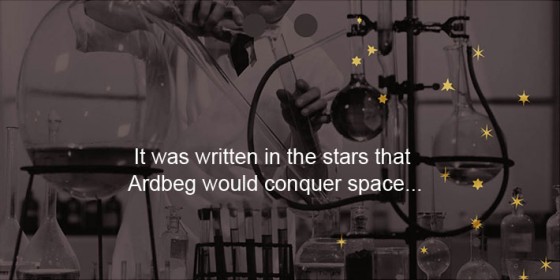 “What happens when you make whiskey in space, where there’s no gravity?”

The question hasn’t exactly dogged mankind through the ages, but for a group of Scotsmen, it’s become an obsession.

Come to think of it, it’s not difficult to imagine a young Scotsman watching Neil Armstrong walk on the moon and wondering aloud: “I wonder what whiskey on the moon would taste like?” Australians might have their apple beer and E=MC² broth formulas, sure. And maybe the Irish have their.. whatever it is Irishmen drink before getting into fights. But Scots? They’ve got the juice o’ the barley.

So when the International Space Station was finally built and manned, Scottish brewer Ardbeg began a quest. They wanted to find out whether whiskey finished in space tasted different than that which was matured on earth. So they hitched up their kilts and set to work.

First, arrangements were made to put some unmatured whiskey onto the space station for three years, away from the prying hands of the astronauts on board, of course. The immature whiskey was split into three samples. One was packaged for shipment to the space station, one was similarly packaged but left on the ground, and the third was (we assume) consumed in the process of all that packaging.

The samples were sent into space and their counterparts were kept on Earth. Once the samples were on board the ISS, they were combined with charred oak shavings in specially-made vials. The samples on Earth were given the same treatment at the same time. Then the long wait. Three years of it. About the same amount of time it took for Mel Gibson to grow his hair out for Braveheart.

Now, the wait is over and the samples sent out to space to mature have been brought home. They were opened by expert tasters at Ardbeg (a job we’ve still not figured out how to qualify for) and sampled in comparison to those left on Earth. The result?

According to the tasters, the “Earth samples” were similar to 3-year whiskeys from Terra Firma, with a few marketing phrases in favor of the house blend included. The “space whiskey?” It was “intense,” and “rounded” and had notes of “antiseptic smoke, rubber, smoked fish..” All of that means “It’s friggin nasty,” after translation.

Some other scientific experiments were also carried out. Their results mimicked those of the expert tasters. The space whiskey is gag-inducing and worse than the three dollar rotgut you buy to quickly numb yourself before a Nickelback concert you’re only attending because that hottie really “digs them.”

So, for now, dreams of clinking glasses of space whiskey while touring the cosmos with Carl Sagan’s head in a jar as Isaac Asimov reads from his story collection and Bender guzzles oil are still just the product of cartoon sci-fi.