This is Lucy Lawless. She gets naked at the beginning of Episode 2

There was a time, not so long ago, when the barbarian movie reigned supreme in theaters, on VHS and on cable. This was the ’80s, when men had iron thews, nudity was plentiful, and gore effects were at their height. Boris Vallejo wept to see the beauty of his van art brought to life.

But, sadly, all things must pass and the barbarian movie faded away. 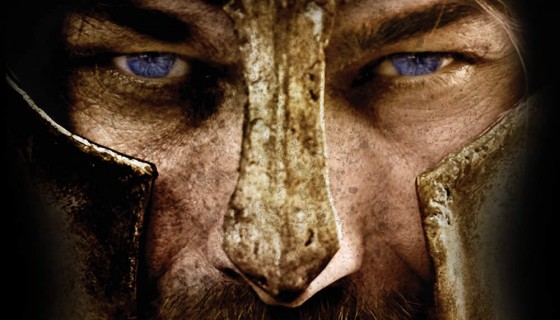 If you’re not watching “Spartacus: Blood and Sand”…what the hell is wrong with you? This show redefines the glory that is what lesser beings call “testosterone poisoning”. This is a show that starts with our hero stabbing the shit out of a bunch of jackholes in masks, dropping f-bombs while blood flies everywhere. There are at least three sex scenes per episode so far. The first episode ends with the hero cutting somebody’s legs off and then impaling him with a trident. The second episode features Lucy Lawless finally getting her tits out AND getting fingered by a hot chick on film. Hell, the first episode features a hot blonde getting totally naked, complete with bush. Bush! We can’t remember the last time we saw bush in something that wasn’t porn. Oh, bush, how we’ve missed you in our daily entertainment!

OK, OK, there are some downsides. The second episode, while rife with violence, gore, and female nudity, takes place at a gladiator school, so there’s a lot of flopping dicks and fat guys in loincloths, but we guess there has to be something to turn on the fangirls and the gay guys. In fact, the episode opens with a bodybuilder badly acting out a monologue while buck-naked. And it also opens with that wimpy guy from the “Mummy” movies getting blown, which is scarred on our retinas for life.

But, dammit, these are sacrifices we’re willing to make. This show has all the subtlety of a beating, but that’s a beautiful thing. It means that when it hints Lucy Lawless is going to seduce the hot blonde, it means we’ll see hot lesbian sex. It means that the show hints Spartacus will be a bad-ass gladiator, it means he’s going to stab some motherfucker and blood will rocket out.

So the show is like “300: The Series.” So the lighting makes it look like moving van art. So the lead has one switch marked “Angry/Pensive”. So what? Who cares? Who watches cheese like this for the acting?

“Spartacus: Blood and Sand” is lewd, violent, tasteless, profane and gory. It is everything cable should be when it’s not trying to be high art. And you can even watch it instantly on Netflix. So do so, or Spartacus will cut your wang off.