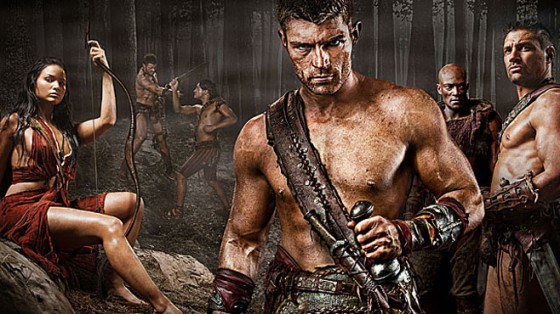 Last we left Spartacus and his band of rogue gladiators, they were hacking and slashing through the House of Batiatus on their way to freedom in the final episode of Blood and Sand. That was in April of 2010! A prequel, Gods of the Arena, temporarily satiated our bloodlust last January, but it was a mere appetizer for the main course, Spartacus: Vengeance, which premieres tonight at 10pm on Starz.

Sadly, there is no Andy Whitfield, who succumbed to cancer last September. Stepping into the titular role will be Liam McIntyre to lead what promises to be a bloody rebellion versus the Roman army. Violence. Nudity. Sex. This series has it all. Added bonus: Lucy Lawless and her spectacular breasts survived the season 1 carnage. Second added bonus: Gannicus, freed champion from Gods of the Arena, is back. Here’s a kick-ass tribute appropriately named “Bring the Pain.”