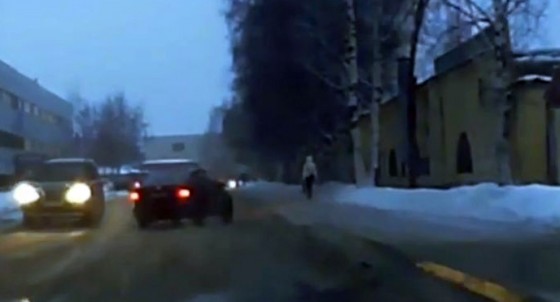 No one was seriously injured in this video, so it’s okay to laugh, or at the very least point out the utter stupidity displayed by this Russian driver, and to a lesser extent the female pedestrian.

I’m no meteorologist, but I gather Russian winters aren’t very pleasant and icy roads are quite common. Driving like Danica Patrick at a NASCAR race probably isn’t advisable, nor is walking directly beside said icy roads. Excuse me young Miss, but there appears to be a section of sidewalk to the right of the treeline that would provide some much-needed protection from Vodka soused idiots impersonating Jason Statham in the Transporter movies.