WARNING: Spoilers for Avengers: Endgame lurk within. If you haven’t seen it yet… I really don’t know what to say. You had at least two months and a theatrical re-release.

There’s not enough praise which can be given for Tom Holland’s fascinating performances as Peter Parker/Spider-Man since his introduction to the Marvel Cinematic Universe in Captain America: Civil War. He’s had five films as our favorite web-slinger – two with his name on the titles – and he’s consistently been a joy to watch as he evolves and matures. There’s a good- and sweet-natured playfulness he possesses which gives the often-harsh MCU a great deal of levity and emotion; all you really have to do is watch his scenes in Avengers: Infinity War to see the balance he brings to the entire film. 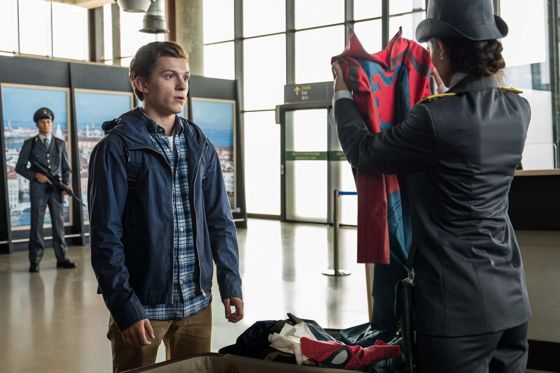 Parker has more than earned the second movie bearing his name, Spider-Man: Far From Home, especially after all he goes through in Avengers: Infinity War and Endgame. If Endgame was the final blowout chapter of the Infinity Saga, Spider-Man: Far From Home is the dialed-down epilogue which throws the effects of undoing Thanos’ (Josh Brolin) genocidal snap into sharp human relief. It’s here where we learn firsthand how the world – well, at least through the eyes of students at the Midtown School of Science and Technology – has dealt with the sudden reappearance of the missing population. 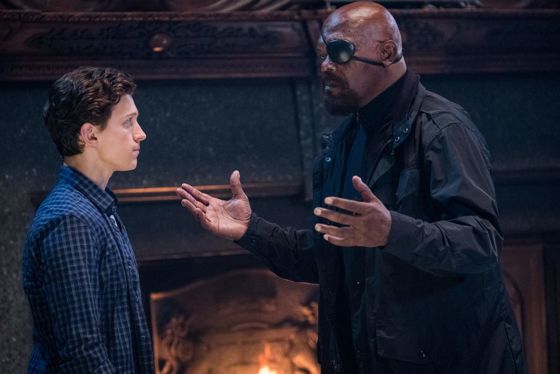 Three-time MCU writers Chris McKenna and Erik Sommers don’t shy away from the more emotionally-damaging effects of the “blip,” as Betty Brant (Angourie Rice) calls it in the school’s morning news broadcast. They make sure we appreciate both of the serious and humorous sides of the event, with stories told and shown of the reappeared causing mass hysteria and funny accidents. But we’re still here to see our titular hero, who’s still grieving the loss of his friend and mentor, Tony Stark (Robert Downey Jr.). There’s no friend like Tony, who gave his life saving the world from Thanos and his army, and it’s certainly not easy letting him go. Holland plays this with all due solemnity and respect while juggling Peter’s newfound feelings for MJ (Zendaya), which seem kind of out of left field, considering the last time we saw Peter attempt any kind of romance. 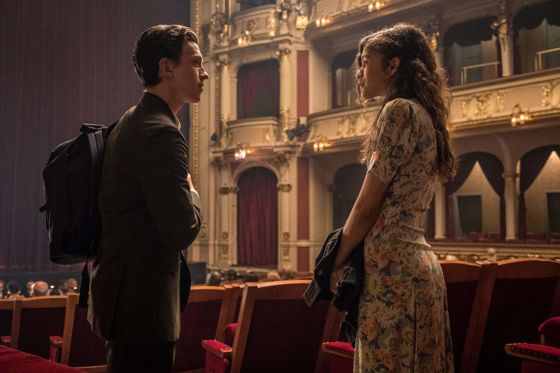 His former love interest Liz Allan (Laura Harrier, not appearing in this movie) has graduated high school and is out of the picture – at temporarily, if Spider-Man: Homecoming’s mid-credit scene gets built upon in future movies. We saw the possibility of sparks between Peter and MJ at that film’s end, and owing to the brevity of Peter’s time on Earth in Infinity Wars and Endgame, we don’t know exactly how that has evolved. Spider-Man: Far From Home propels this development forward quickly into a full-on crush with Peter aiming to put the moves on her during their class trip to Europe. However, that’s gonna get put on hold, as a new threat has just arrived in the form of The Elementals – beings formed of air, water, fire, and earth hellbent on destroying the planet and its inhabitants. Extradimensional traveler Quentin Beck (Jake Gyllenhaal) seems to be the only one able to stop them. 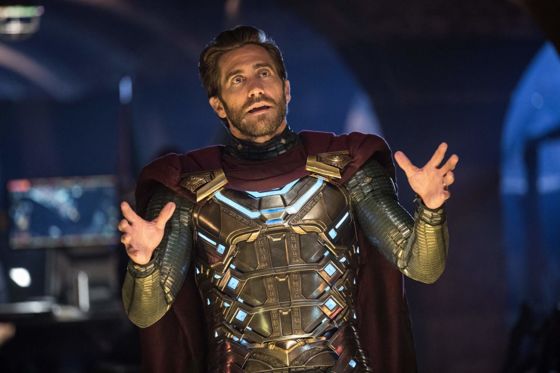 Quentin – who loves the new name “Mysterio” bestowed on him by Peter – seems like a genial guy. He’s been chasing these Elementals throughout the Multiverse and he needs help, which Nick Fury (Samuel L. Jackson), Maria Hill (Cobie Smulders), and Peter eagerly give him. S.H.I.E.L.D. is running on a skeleton crew and the rest of the Avengers are off-world or unavailable. Happy Hogan (Jon Favreau) has just delivered Peter a postmortem gift from Tony to help him in his future crimefighting endeavors, but it comes with a power he’s reluctant to wield. He just wants to be a kid; he doesn’t want or need this responsibility. All he wants to do is go on his class trip and hope MJ likes him as much as he likes her. 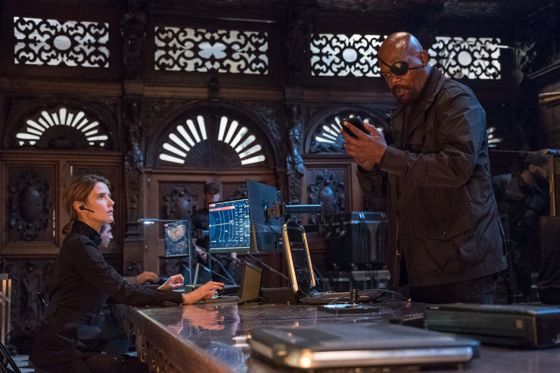 Which, of course, is when the movie goes into full-on Scooby-Doo mode. Y’know, where something’s not quite right and the gang has to figure it out? We juggle the love story and the action, which are easy enough to handle, and director Jon Watts does it effortlessly. However, once motivations are revealed and the appropriate remedies are taken, you’ll find you’re staring at a very familiar kind of story and plot. Quite frankly, it’s a little too close to the way Captain Marvel unfolded earlier this year, and the film suffers a little from this lack of originality. Yet, for all of that, it’s fine for what it is, being the last film of MCU Phase 3, and it doesn’t try to do any heavy lifting – all of that was done a few months ago in Endgame, so you don’t have to prepare yourself for anything earth-shattering. (Well, maybe the mid-credits scene might shock you a bit. And by “a bit,” we mean “HOLY CRAP WHAT JUST HAPPENED.”) 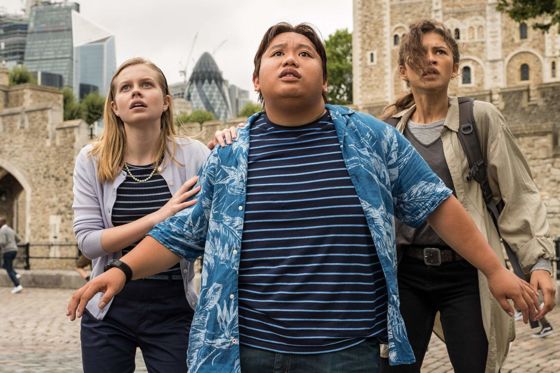 The film’s themes of loss and grief are given a surprising whack of the “post-truth” era we seem to be living in currently. One can almost hear the cries of the aggrieved fan, “COMIC BOOKS AREN’T SUPPOSED TO BE POLITICAL!” Um, where’ve you been since the inception of comics as an art medium? From Action Comics #1, the writers’ and artists’ personal beliefs have been on display for anyone willing to read and hear them. Spider-Man: Far From Home takes its metaphors and actions to a whole new level, offering unexpected twists and turns which highlight the post-truth theme. The wronged feel entitled to some get-back, as James Brown would call it, and they’re coming for it with a passion. The film’s mid-credits scene shows you how far they’re willing to go, and the Pandora’s Box it opens casts quite a pall on future events. 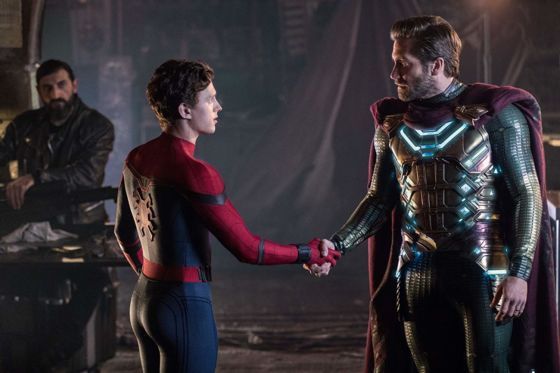 But Watts and company want us to have fun with this installment, and they succeed in bringing it to us. The IMAX version opens up from a cinematic 2.35:1 aspect ratio to a screen-filling 1.90:1 for wondrous views of location shooting and action. Holland and the cast look like they’re having the time of their lives with this movie, so don’t be surprised if a little of that gets on you. But the sharp turn the film takes halfway through – coupled with the aforementioned mid-credits scene – makes us truly ponder if we’re seeing everything the right way, if at all. Spider-Man: Far From Home combines thrills with a certain kind of discomfort which comes as a result of seeing the truth distorted into lies, which is why this film is a must-see at the multiplexes. For those expecting a safe, non-confrontational kind of film… go watch The Secret Life of Pets 2. Spider-Man: Far From Home isn’t here for your safety; it may push some buttons, but it’ll make you smile while it’s doing so.

Rated PG-13 by the MPAA for sci-fi action violence, some language and brief suggestive comments.
Mid- and post-credits scenes. These are pivotal! If you need to go to the restroom, go after the mid-credit scene is over, then come straight back to the theater.
Running time: 129 minutes.
Released by Sony Pictures Releasing/Columbia Pictures.

Peter Parker has more than earned the second movie bearing his name, Spider-Man: Far From Home, which picks up months after the events of Avengers: Endgame.