Spider-Man: Into The Spider-Verse – Review 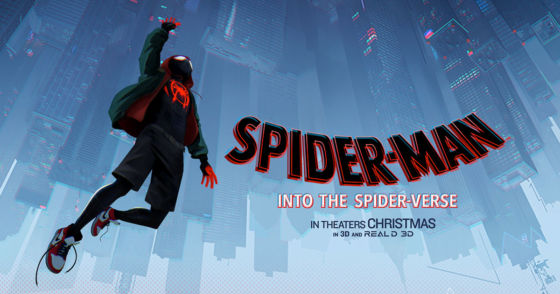 Recently, on the knockout episode “Jeremy Bearimy” of NBC’s “The Good Place,” lead character Eleanor Shellstrop makes a list of rules concerning how life should be governed. “Rule number one: I get to do whatever I want, and you all just have to deal with it. Rule two: no more Spider-Man movies! There’s way too many Spider-Man movies! Too many dorky, little, twerpy Spider-Men.” Good thing she doesn’t make the rules; otherwise, the world would have missed out on one of the finest Spider-Man films in existence.

Honestly, when it was first announced, Spider-Man: Into the Spider-Verse sounded like too much of an obvious cash-in on Spidey’s current popularity. Truth be told, it’s a popularity which has been surging since Sam Raimi brought the character back to movie audiences in 2002, culminating in the character’s recent placement in the Marvel Cinematic Universe. Yet, once you get to your theater seats and the lights go down, Spider-Man: Into the Spider-Verse takes you into an endlessly vibrant and intricate origin story of the newest web-slinger.

The film’s major advantage lies in its computer-animated realm, capable of showing us the infinitely impossible. Any random frame of this film could be cut out and put up on a wall, or it could be stuck into a panel in a comic book. Make no mistake; this is high art, innovative and imaginative. Characters fly high and defy any kind of earthbound logic, which the film’s animators handle with grace, precision, and audacity. The trio of directors – Bob Persichetti, Peter Ramsey, and Rodney Rothman (who also co-wrote the screenplay) – guide us into spaces where no cameras could go and show us what no mere mortal could do.

Cities, underground lairs, even simple homes are given gorgeously-exaggerated life and detail. Spider-Man: Into the Spider-Verse immerses the viewer completely into this colorful version of New York City, punctuated by graffiti and teeming masses all scurrying to their next destination. Each object and person has been drawn and realized in a classic comic-book style, immediately suspending disbelief and sinking you into the film’s embellished milieu.

Filling out the animation is a wonderful voice cast, picked perfectly for their attributes and attitudes. It starts with our hero and narrator, Miles Morales, played sweetly by Shameik Moore. Miles is a kid from a poor neighborhood being sent to an upscale, mostly-white prep school on the other side of town, further cementing his feeling of being out of place. Especially when he’s driven to school and playfully embarrassed by his policeman father Jefferson (Brian Tyree Henry); it’s one of those “I’m just gonna go crawl into a hole and die” moments for Miles. And wouldn’t you know it – a lovely girl named Gwen Stacy (Hailee Steinfeld) just happens to have seen the whole episode.

Miles also has a little rebellious streak, nurtured and channeled by his ne’er-do-well Uncle Aaron (Mahershala Ali), who shows him a place where Miles can flex his artistic muscles. Of course, this location happens to be in an abandoned part of the New York subway system, inhabited by – you guessed it – a radioactive spider which takes a chunk out of his hand. Before you know it, Miles is suddenly growing tall and sticking to walls, wondering how the hell his life could get any weirder.

Well, he’d better buckle up, ‘cause he’s about to take the Spider-Man mantle from Peter Parker (a cameoing Chris Pine), defeated by Wilson Fisk (Liev Schreiber) in a horrible turn of events. Fisk – also known as Kingpin – has created a machine capable of interdimensional travel, and it’s up to Miles to destroy the machine. Each time it’s turned on, dimensional breaches occur and the reality of Miles’ version of New York City is altered, with buildings and various structures temporarily turning into neo-Cubist art forms. Oh, and several other versions of Spider-Man alarmingly find themselves in Miles’ dimension, ready to join Miles’ mission.

We’re introduced to Peter B. Parker (Jake Johnson), gone to seed after his marriage to Mary Jane Watson (Zöe Kravitz) disintegrates. Shuffling about like the world is passing him by, he takes a shine to Miles and trains him how to be Spider-Man, from the best method of swinging from web-ropes to crawling up walls. Johnson, most known for his role as slacker Nick from the now-canceled sitcom “New Girl,” fits perfectly well as this version of Peter, a dude who doesn’t have a plan past waking up each day. Both he and Miles give each other the spark they need to get their lives in order, or at least under some semblance of control. 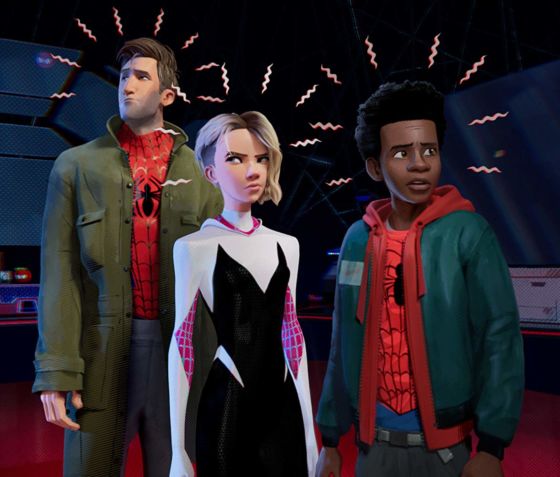 A 1930’s-era Spider-Man Noir (Nicolas Cage) comes in looking more like The Shadow, complete with a street-toughened growl and a demeanor to match. On the more lighthearted side, we have Peni Parker (Kimiko Glenn), an anime-style little girl with a telepathic bond to her mecha-suit, and Peter Porker (John Mulaney). Yup – it’s Spider-Ham in all his glory. These characters – along with Spider-Woman, whom Miles recognizes as his classmate Gwen – all have their own special abilities central to the fight against Kingpin and, more importantly, Miles’ growth as a person and superhero.

It’s Shameik Moore’s film, and he voices Miles with the genuine soul and emotion of an awkward, misfit teenager whose dreams are bigger than his head can contain. He also provides a timid sort of confidence inherent in a boy just starting to learn of his capabilities and wants, full of eager hope and joy mixed with the sadness of youth ending and transitioning into young adulthood. There are vocal performances meant to move a film along, and there are those which make you believe the character and believe in the character. Enchantingly, Moore gives us the latter, delivering a wholly real and unforgettable performance.

Nods to every iteration of Spider-Man (be sure to stay past the credits) are found, from the comic books to Tom Holland’s turn in the Marvel Cinematic Universe. Most of these come in the early goings so as not to distract you from Miles’ story and evolution. The events of Spider-Man: Into the Spider-Verse teach him some enlightening yet hard lessons, both as a regular teenager and as a burgeoning Spider-Man. These are backbreaking truths the other Spider-Incarnations can’t teach him, and our hearts break with him as he learns the most damaging of them all.

Yet our hearts and spirits also soar with him as he makes his steps into both life and superherodom, with headway gained bit by bit, as we all did (or will do) at his age. With the magic of this film’s beautiful animation and the exceptional voice cast, it’s a little easier for us to relive what it was like to be an ungainly kid trying to find our place in our families, schools, cities, and life itself. The peril of puberty is given weight and a humorous parallel without making it a major sticking point (no pun intended at all!), much like the film metaphorically deals with mistakes made and the wish to correct them. Powered by a multi-talented, multicultural cast, Spider-Man: Into the Spider-Verse is an excellent entry into the Spider-Man canon, going toe-to-toe with its larger-profiled brethren and coming away an absolute winner.

(p.s. Don’t be surprised if you find your eyes unexpectedly leaking somewhere around the first thirty minutes. The computer screen’s getting hard to see while writing this warning.)

Spider-Man: Into The Spider-Verse

Powered by a multi-talented, multicultural cast, Spider-Man: Into the Spider-Verse is an excellent entry into the Spider-Man canon, going toe-to-toe with its larger-profiled brethren and coming away an absolute winner.