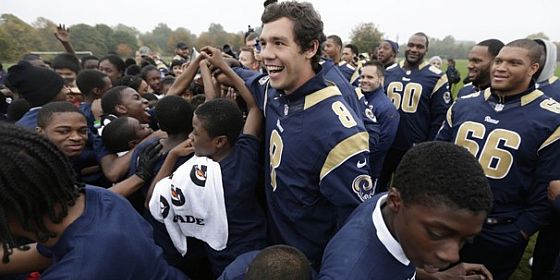 This week, for the sixth consecutive year, the NFL is playing a regular season game in London. This year’s version of the series features a repeat appearance from the New England Patriots (who defeated Tampa Bay in the 2009 London game) against first timer St. Louis. The Rams, hoping to build an international following to supplement a dwindling fan base at home, arrived in London early this week in order to reach out to the fans. In this video from the U.S. Embassy (that’s a first for us) we can see the Rams holding a football and cheerleading clinic with local kids in London’s Regent’s Park. We assume they are scouting for a starting WR while they are in town.

The Rams didn’t forget their potential adult fans while they are in town either, as the Rams Cheerleaders made an appearance at Nike Town in downtown London.