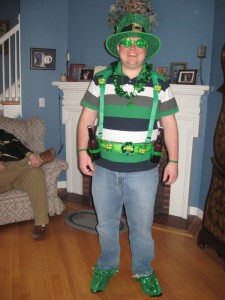 I’m getting married in less than two weeks, so some friends decided I needed to get extremely drunk and go look at some naked women, so I did. Well, I got drunk, but I’m not sure about extremely drunk, I could remember most of the night.

We started out at my parents house at around 11 AM, where my Dad and Uncle Matt deep fried some wings and Uncle Matt gave me my first beer of the day, along with a Sparks to keep me awake. People started showing at up just about the time that the wings were ready so we headed inside to eat some wings, sandwiches and all the food my aunts decided I needed to prepare me for a day of drinking. We hung out for a little while before deciding to check out the BeerBlaster (more on this in a future article). It was a little too cold to actually shoot each other, but shooting beer into your mouth is fun, if a little foamy. My friends then proceeded to dress me up in a crazy St. Patrick’s Day costume in preparation for the the Hooley Pub Crawl. The Hooley (which means party in Irish) is a St. Patrick’s Day celebration held in Cumberland, Md the Saturday before (or of) St. Patrick’s Day. During the Hooley all the bars downtown play Irish Music (mostly live) with the headliners being the Shanty Irish, whose music seems to get better and better as the night goes on, but that might be the alcohol. 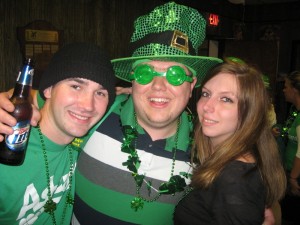 After meeting Downtown we hit our first bar of the night, Ed’s Canal Pub. Ed’s is nice little bar with plenty of great microbrews on tap, it was packed, but we eventually made our way to the bar and ordered some Irish Whiskey and a beer. We then proceeded to City Lights where we picked up a few more beers and someone bought me the worst shot of Vodka I’ve had since college. After this, the afternoon was beginning to get a bit blurry, because I had forgotten about going the next bar, which was Eagles. Not only did I forget about the bar, I complained that I didn’t get to see the Shanty Irish this year, but I was surprised to find out that they were playing at Eagles while we were there. After thinking about it I do remember a few things from Eagles such as running into a few friends, one of whom bought me a shot, and another I apparently knocked over and spilled beer on(the girl above, don’t worry she was very drunk too).

OK, maybe at this point I had reached the extremely drunk point.

Well, we got out of there and headed back to Ed’s and ran into to Dad, Uncle Matt and a few more friends, who may or may not have gotten me another shot, but I don’t believe I spilled beer on any of them. We then dropped by Reds (a pool/cigar bar), but it wasn’t too long before we decided it was time to check out some naked ladies. So we headed over the Potomac River to Legz, and Phil can tell you about that. I’m not entirely sure how late we stayed at the strip club, but I woke up at 7 on the couch with a plate full of chicken bones. At the time, I wasn’t sure if the midnight wings had been the best idea, but that was nothing another 4 hours of sleep couldn’t cure.