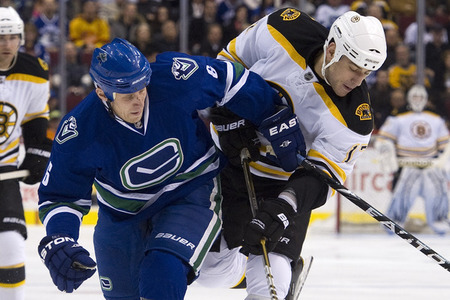 The Bruins and Canucks will battle for hockey ultimate prize.

The dust has finally settled on what has been, the greatest NHL Playoffs I have ever witnessed. Between all of the amazing overtime games, and the tremendous series’ that have gone the full 7 games, this series is shaping up to be a classic. The Stanley Cup Finals has come down to opposite ends of the continent, as the #1 seed Vancouver Canucks get ready to take on the #3 seed Boston Bruins. Personally I think this is the best matchup the NHL could have hoped for in terms of getting the best series possible for the finals.

The road to the finals began for both teams in similar fashion, with the Canucks taking on their playoff nemesis, the Chicago Blackhawks, and the Bruins facing off against the Montreal Canadiens. Both series were epic, and reached the ultimate conclusion: Game 7 overtime. From there though, the roads differed.

The Canucks seemed to be on a path of destiny, and played with tremendous confidence throughout the remainder of the Western Conference Playoffs. They cast aside Nashville, dumping them in 6 games, and then they did the same to San Jose, thoroughly dominating them all series long, and easily advancing to the finals in 5 games, for the first time since 1994.

The Bruins in the 2nd round exorcised their demons, making amends for last season’s collapse against the Flyers, and trounced them in a 4 game sweep. In the Eastern Conference Finals, they were again pushed to the brink, this time by a young, upstart Tampa Bay Lightning team, but the Bruins held on to win game 7 on their home ice, to make their first Stanley Cup Final since 1990. 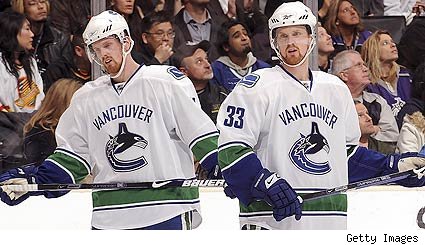 The most dangerous duo in the NHL: The Sedin Twins

Both teams were in the top 3 in their respective conferences in total goals during the regular season with the Canucks leading the NHL. They have what might be the deepest lineup in the league, with the Sedin twins, and Ryan Kesler leading the attack for the Canucks. Henrik Sedin is the leading scoring in the playoffs coming in to the series. The Bruins counter with a more balanced attack, led by Nathan Horton and David Krejci, both tied with 17 points in the playoffs thus far.

While both teams rely on their depth to provide a constant attack while in the offensive zone, I tend to think that because of the Canucks having more star power in their lineup, they have the edge on offense. 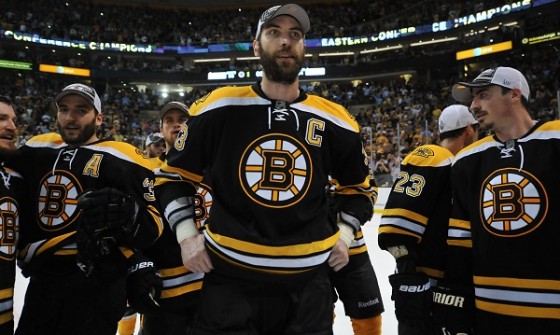 That's a big ole can of Chara Beans

Despite both of these teams being two of the highest scoring teams in the league, more impressively, they both were in the top 3 in terms of fewest goals given up during the season. The Canucks gave up the fewest goals in the league, while the Bruins were third, giving up only 10 more goals all season. I think that in this series, the Bruins have a small edge, given that they have one of the top 3 defensemen in the league in their captain, Zdeno Chara. 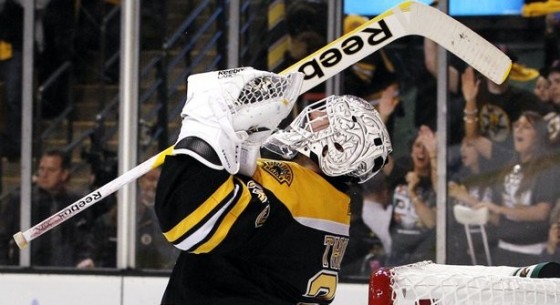 If you asked hockey fans who the two best goaltenders in the world currently are, I would be willing to bet that most would say Roberto Luongo, and Tim Thomas. Both were stellar this season, and are up for the Vezina Award for best goaltender after these playoffs complete. 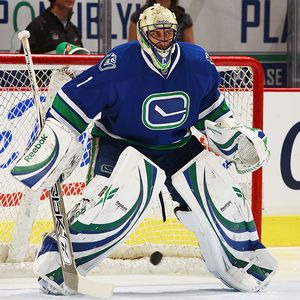 Luongo has backstopped his team to a Stanley Cup birth.

Luongo had a reputation as a playoff failure coming into this year, and had a few struggles in the opening round, but since his stellar play in game 7 of the opening round, he has been terrific, and has his team on the brink of a title. 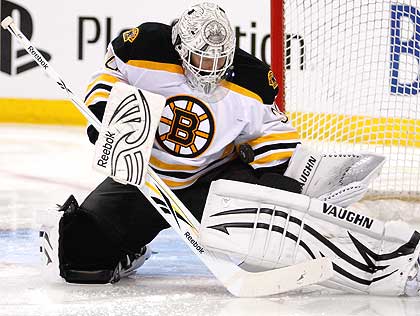 Thomas has the Bruins on the verge of a title.

While Tim Thomas has been the most consistent goalie in the league this year, leading the league in both Save %, and Goals Against Average during the regular season. Many thought that Thomas was done after battling injuries and the emergence of Tuuka Rask last season, but he has bounced back in a huge way for the Bruins.

I don’t think either team really has an edge in the goaltending department.

I personally cannot wait for this series to get underway, I think this is the best matchup that the NHL could have asked for from a pure hockey watching standpoint. These two teams are so evenly matched that I think we are in for one of the best Stanley Cup Finals in a long time.

But when it comes down to it, I think that the Canucks have more play makers on offense, and I think that gives them the slightest edge in this series. That and the fact that they have the home ice advantage will come in handy, because I think that this series will end with… Vancouver In 7.