So … how did Lord Stanley’s mug end up in the bottom of Mario’s pool? After the Pittsburgh Penguins’ first Cup win in 1991/1992, the team was invited back to Mario’s palatial home to celebrate. The house featured an in-ground swimming pool. The pool’s decorative highlight was a four-tier neon-lit waterfall. During the course of the party, Penguins goaltender Tom Barrasso climbed up the waterfall with the Cup, and had his photo taken. After much more of this, the Cup was left atop the waterfall and the party went on. Meanwhile, defenseman Phil Bourque, who had been enjoying a frosty alcoholic beverage or two, decided to scale the waterfall. According to legend, clad only in his underwear, Bourque lifted the Cup and hurled it into the pool, where it sank ignominiously to the bottom. Since that infamous day, the Cup travels with security escorts assigned by the NHL.

The Pittsburgh Post Gazette Flickr has more photos of this years dip in the pool, which seems to have come at a more family oriented event, but here are some of our favorites. 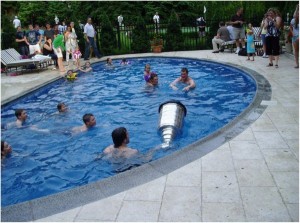 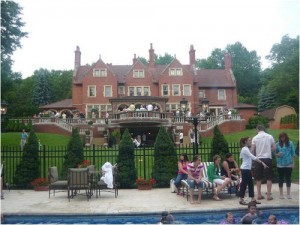 Is this Alyonka Larianov or one of her sisters with Evgeni Malkin? 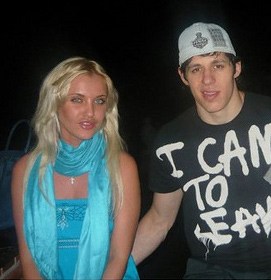 For more adventures of the Stanley Cup, check out the World of Isaac. For more of the Penguins celebration, check out Puck Daddy.