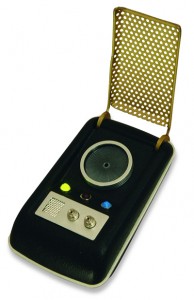 Think Geek has everything you need to complete your Star Trek gadget collection. One of the sweet devices that good ol’ Captain Kirk used many of times while “boldly going where no man has gone before” was his Communicator. As much as you are tempted, don’t throw out your smartphone and think that the Communicator will take its place, unless you are trying to contact Scotty to beam you up.

The Classic Communicator has all of the bells and whistles that the crew used in the original Star Trek series. All you have to do is flip up the grill, and you’ll be greeted with the lights and sounds from the films. The Communicator has voice clips from the actual series as well. You will be listening to the sounds of Kirk, Mr. Spock and it has a “Hailing Function” where once you  press a button, close the grill, and 5 seconds later the Enterprise will be calling. There are a total of over 20 sound effects and phrases, including Spock here, Captain, Scotty here, Captain,  and Transporter room ready to beam up. The actual size of the Communicator when closed is approx. 4″ x 2.5″.  The Classic Communicator sells for $34.99 and can be purchased at ThinkGeek.com