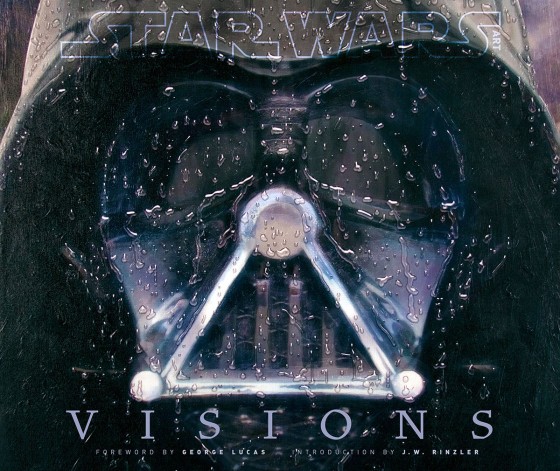 As you probably have guessed I am a Star Wars geek. From lightsabers to Tauntaun sleeping bags, I have seen all things Star Wars. That was until I came across a new book from Abrams Books called Visions. The book has artwork from over a hundred well-known artists and covers themes from the entire Star Wars world. It contains 120 breathtaking paintings with each artist’s interpretation of the many characters and themes from Star Wars.

It’s fitting to finally see a book of this caliber come out and show the many aspects of the Star Wars universe. While making the first trilogy, George Lucas used the artwork from Norman Rockwell and N.C. Wyeth for his own inspiration to put his vision of Star Wars on paper to get costumes and set designs ready for each film. Lucas also spent an enormous amount of time with the artists at LucasArts to get every detail of his visions translated to the screen. The artists helped bring out Lucas’s visions in what we ultimately see in all six films. 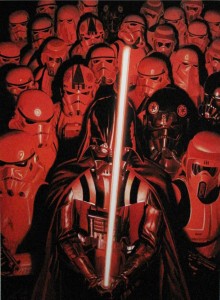 The hardcover book has a wide range style of artists. The above painting of Darth Vader was done by Alex Ross, who is known for his great work in the comic book world. The picture below titled “Luke’s Lession” was done by Jacob A. Pfeiffer. Jacob said this about art, “I think art should speak for itself. I am not a believer in lengthy descriptions about artwork of the creative process.” When I saw Jacob’s painting, many things sprung to mind regarding his artwork. The stones take me back to The Empire Strikes Back when Luke was training with Yoda, while the lightsaber, table and wall remind me of Obi-Wan’s home on Tatooine. I see the teachings of both Yoda and Obi-Wan in this picture. 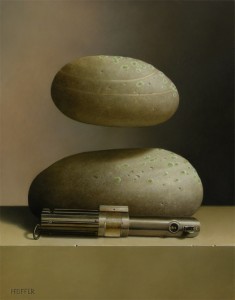 The whole book takes you on a new journey into the Star Wars universe. You get to see each artist’s view on the films. This is another great way to celebrate the Star Wars films.  The book not only takes themes from the six films, but other characters and motifs from the Star Wars universe and translates their visions of Star Wars to canvas. The book is a must-have for Star Wars fans and is priced at $40.00. You can purchase the book at the Abrams Books website or on Amazon.com. Check out the trailer below for Visions.