This post brought to you by Propel Star Wars Battle Drones.
The content and opinions expressed below are that of Gunaxin.

With the latest in the Star Wars saga hitting theaters this week, and the holidays coming swiftly on its heels, it’s no surprise that a new Star Wars toy is the hottest thing on the planet this holiday season. We hesitate to even call the Star Wars Battle Drones toys, as we wish not to diminish how awesome they are. We’re in awe of what it must be like to grow up with such technology, because the 14-year-old versions of ourselves would have absolutely had our minds blown by such a gadget. We were on our way to the Tosche Station to pick up some power converters when a Battle Drone arrived for “Testing” and you can imagine how we’ve spent every hour since. 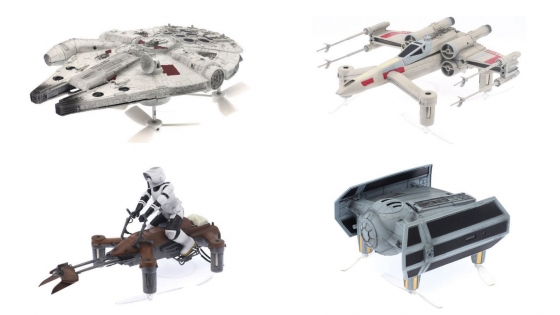 Star Wars Drones are high-performance laser battling quadcopters from the folks at Propel, in partnership with Disney. There are four designs that you can see above, but apparently only three are currently available :

The rebellion might just be outnumbered for now, until the bucket of bolts known as the Millenium Falcon is able to enter the fray. We presume Chewbacca is still working to fix the hyper-drive in the fastest hunk of junk in the galaxy. Each battle drone is extremely detailed; hand painted to model quality finish, certified, numbered, and packed in a fabulous collectable display box. 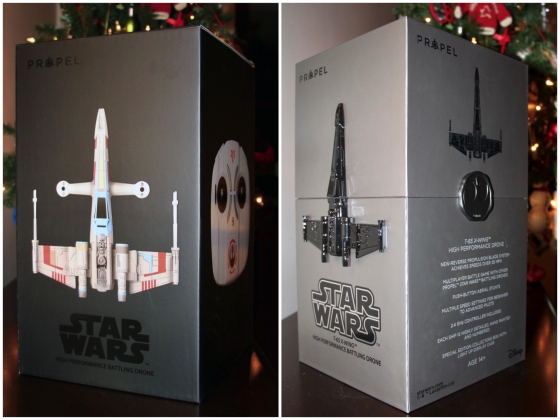 “You are a member of the rebel alliance, and a traitor.”

We were delighted to receive an X-Wing, and couldn’t wait to crack it open, join the Rebellion, and begin testing. The un-boxing experience was sensational, and not something we were prepared to capture on video. For that reason, we’re going to share some 3rd party video of Vader’s TIE Advanced x1 un-boxing. We have a bad feeling about this…

Oh my. Can you imagine opening that up on Christmas morning while wearing your Stars Wars footie pajamas? When the top of the package is opened, Star Wars theme songs and quotes relevant to that specific ship project from speakers in the case. Here is what our X-Wing looked like in its display case, just waiting to be launched. 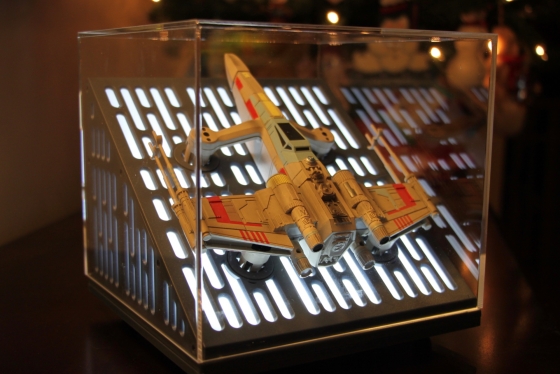 Each Star Wars Battle Quad has three speed settings and uses a reverse propulsion blade system that achieves speeds of just over 35 MPH. They feature a first-ever infrared laser encoded to transmit to an app that allow users to battle each other and keep score. Since we only received one drone for testing, we haven’t been able to battle yet, but we’re still trying to get the hang of flying the drone. 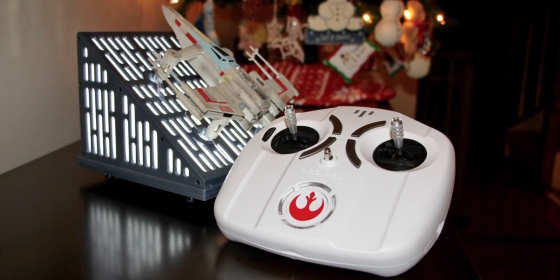 Up to 24 drones can battle at once, so we have a pretty good feeling how we’re going to be spending our evenings at CES this year. The quads take about 10 minutes to reach a full charge, which lasts about 6-8 minutes of flight time, depending on how aggressively one plays. We’ll admit it, we play aggressively. Our time with the Star Wars Battle Drone has been limited, but so far we’re in love. Our flying skills are progressing, and we can’t wait to get into the fight. 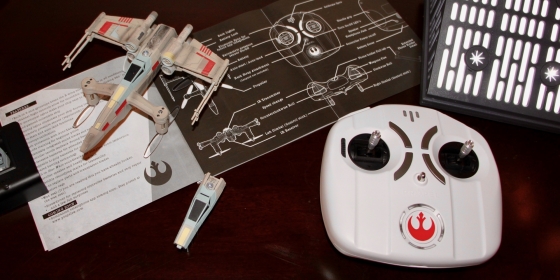 Star Wars Battle Quads are available online at propelsw.com and at retailers including Bed Bath & Beyond, Brookstone, Best Buy, Barnes and Noble, Kohl’s, Fry’s and Disney Stores. While theoretically they are designed for children, we definitely wouldn’t blame you if you put one under the tree marked with your own name too.