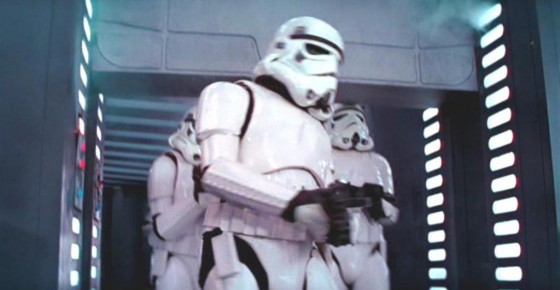 I am a HUGE Star Wars fan. I have been, at a time or two, something of a collector (once turning my walk-in closet into a mini-toy store), a nearly lossless trivia buff, and a solid enough viewer of the original (and better, natch) trilogy to make the claim of 100 viewings of each of the first films. Well, short of turning this into a bragging festival, I will also say that I have noticed many different flubs and gaffs from the entirety of the saga. That being said, I have decided to do a collection of ten goofs from each of the original three films, this one being the first. And so we shall begin with A New Hope. Before I move on with the list here, one has to keep in mind that Lucas’s film nearly didn’t make it to the screen at all and, as Lucas himself tried to push the envelope visually, it was a gargantuan feat in and of itself. Basically, goofs were going to happen. So, out of the many, many that people have discovered (see the IMDB page for easily 80 plus) here are the best ten with video evidence for all. Enjoy part one, everyone!

Watch as, just when Luke is shown from the view over his left shoulder (our right), you can plainly see, twice, that the Rebel Soldier collective is cardboard cut-outs.

9
Kenny Baker Must Have Sneezed

R2 rests, more or less motionless, at the lower right of the screen. However, for some reason, his dome lifts slightly and lowers as if the man (Kenny Baker) inside had to re-adjust himself.

8
Three Plus One Is… Three?

The trio of Stormtroopers capture Leia just after she loads her message into R2. But watch as one of the soldiers disappears into… where?

7
No Wonder It Couldn’t Brace The Walls

This is a two-fer: First, the long supposedly metal bar that Leia discovers to brace the moving walls was, at first, no where near her until she NEEDS it! Secondly, later in the scene, as she and Han try to steady the bar, they crush it several times… since it’s foam!

6
Darth Vader. Not Normally At A Loss For Words

It’s apparent in this scene that Vader had a bit more to say after speaking to Tarkin. Once the speech is over, he continues to point and gesture basically looking, a bit, like an idiot.

Vader, notorious for choking those who oppose him, drops his victim to the table in disgust. Just before, as Tarkin sits back in his seat, it appears the Empire’s chair budget is non existent. Then, as the Admiral slumps back to the table, he shakes the whole set.

Just as Yavin moves into range of the Empire’s most destructive weapon, the Death Star, the timer is shown counting down in seconds just as the gunner’s voice is counting down in minutes. Yavin would have nearly been rubble far sooner.

It immediately becomes evident that the Rebellion couldn’t afford decent bras. Even for a princess.

For some reason the Empire can’t seem to make doorways big enough for the taller Stormtroopers. What a drag.