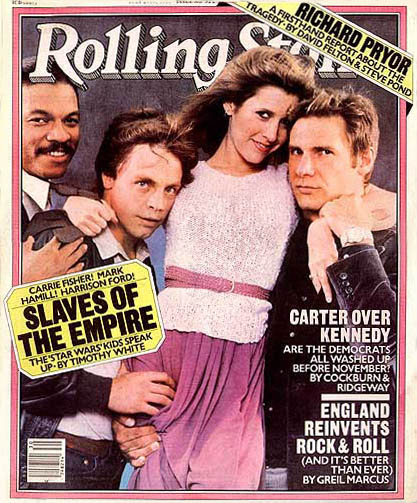 Unfortunately, a few of the flubs in the scenes from our first list, Star Wars Bloopers: A New Hope, were a little hard to see, and, consequently, a bit easier to miss. This time around, however, the second in the original film franchise offers up far simpler and quite a bit more obvious gaffs. As most real hard core Star Wars fans know, and agree, The Empire Strikes Back is the crown jewel of the trilogy. There are huge story arcs, vicious retribution from the Dark Side, and startling revelations. This time around, the directorial reigns went to Irvin Kirshner, and so much for the better. Unfortunately, once the newest movies were made and directed by Lucas himself, it was obvious where the fault line lies. Anyway, even with better direction and a more solid story line, there were still inexcusable mistakes. Here we have but ten.

From the first scene in which we encounter the Millennium Falcon way back in the hanger on Mos Eisley in ANH, it has been outfitted with a satellite dish. However, without any visible removal through the film, it is without one in the space slug asteroid. Hmm.

Okay, according to what one sees in this scene, Han might just be patting off a spark from his pants or something. But, the closer you look, it becomes slightly more apparent that he, quite possibly, farted. Yes, a stretch for a ‘blooper’, but still really funny.

8
The Force: An elaborate dog-and-pony show.

Look closely at Luke’s feet as he balances Yoda and attempts to skillfully stack boulders. You can quite clearly see a few wires helping him out.

7
The shallow breaths of a droid in repose. Wait, what?

Han and Leia get slightly agitated by C3PO and decide to shut him down. However, for a droid, he sure is a heavy breather!

Keep a close eye on several things here in the carbonite scene, because I offer you a multi-blooper! Number one: Han’s shirt changes no fewer than three times between his initial carbonite freezing (button-up, tunic style) to the carbonite itself (his original shirt from ANH) and Return of the Jedi (2-breasted). Also, notice the ropes binding Han’s hands? You’ll never see them again. Ta da!

Watch closely as Han completely mouths everything Leia is saying to him. So sub-professional, Ford.

Watch closely at the rear right leg of the AT-AT just after its massive explosion (seems a bit much, too, doesn’t it) and you’ll see one of the original sticks used to shove over the heavy model.

3
Choke holds: not quite as deadly as the appear.

Darth, ever the strangler, chokes out Captain Needa and he collapses, presumably dead, to the floor. Well, maybe Darth was just in a bit of a forgiving mood that day because watch as the two soldiers drag him up and off, Needa helps out. Now that’s a useful corpse.

Just after Luke slices off the Wampa’s arm, he gives a final glance, and supposedly shuts off (per the sound effects) yet the blade still glows. Hmm.

Watch as just after Vader tosses a whole bunch of metal objects through the window creating about a 1/3 hole when, suddenly, as Luke is sucked through, the hole has grown big enough for him to fit through with no other objects having broken through.