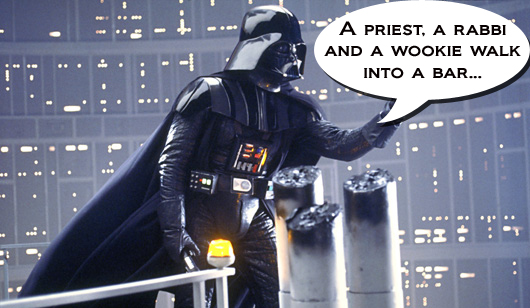 When you think Star Wars, animated comedy series immediately springs to mind, or it will in the very near future. Lucasfilm Animation has struck a deal with Robot Chicken creators Seth Green and Matthew Senreich to develop a new animated series that will poke fun at all the characters in the vast Star Wars universe.

“The ‘Star Wars’ universe is so dense and rich; it’s crazy to think that there aren’t normal, mundane everyday problems in a world so well-defined,” Green said. “What do these characters do when they’re not overthrowing empires?”

Exactly. What do they do when their not engaging in space dogfights or learning the ways of the Force? Do they clip their toenails and eat them? What kind of jerk material do they utilize? These are things I need to know. Thanks to this news, I won’t have to wait any longer to get my answers.

God bless you, George Lucas. Your desire to milk more cash from your galactic-sized cow serves us all for the better.

No network has been announced yet, but all signs point to a home on the Cartoon Network.