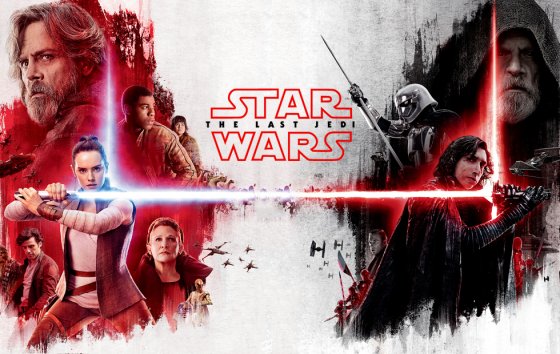 PLEASE NOTE: There will be absolutely no spoilers in this review. Picture us stretching our hands out, Jedi mind-trick style, and intoning: “You WILL enjoy this movie unfettered and spoiler-free.”

For those of you holding your breath, biting your nails in worry about the latest Star Wars film: BREATHE EASY. Your fears are unfounded and you can uncross your legs now. Star Wars: The Last Jedi is everything you’d hope for in a Star Wars trilogy’s second installment, one of the best since The Empire Strikes Back. The story is deepened, backstories come into play, and worlds are shattered from the truths which come to light.

And it’s not your typical Star Wars adventure, either, which helps make the case for it being one of the best films in the Star Wars pantheon. Usually, the action and plot beats of Star Wars films are mapped out to the point of carbon copy. Here, writer/director Rian Johnson chucks it all out to provide a more story-driven gutpunch of an experience. 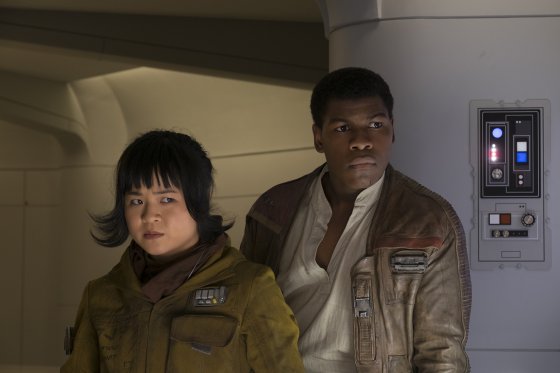 Johnson, noted writer and director of outstanding indie films – don’t sleep on Brick, y’all – and his breakthrough sci-fi thriller Looper, knows exactly how to get at us visually and emotionally. It may be built in, with the remaining Big Damn Original Trilogy heroes gracing us with what could be their last time on-screen in their iconic roles. (Stay tuned through the credits for a simply-written dedication that had me in tears. — Eddie) But it also has to do with connection, which seems to be Johnson’s through-line for his screenplay. 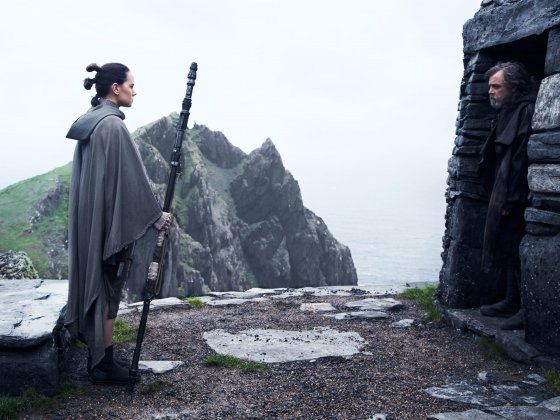 We delve further into the personal and interpersonal facets of the surviving members on both sides, finding their histories and motivations for becoming who they are in the present. Rey (Daisy Ridley) and Kylo Ren’s (Adam Driver) stories were barely explored in The Force Awakens, but they’re given the lion’s share of the heavy lifting here as the Force plays a dangerous game between them. They’re two souls in search of the truth, with Rey turning to Luke Skywalker (Mark Hamill), continuing straight off of the final shot of the previous film. 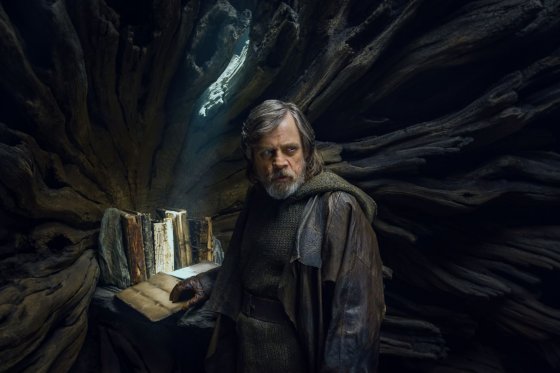 Weary. Wary. Worn. Luke is a battered, broken man, having failed to keep Kylo Ren from the Dark Side. So when Rey shows up on Ahch-To, enjoining him to help the Rebellion – well, after a wordless yet hilarious confrontation – you’ll understand why he looked so scared and trepidatious at her appearance in The Force Awakens. And it doesn’t stop there; you know how they say there are three sides to every story – yours, mine, and the truth? Boy, do we get all three barrels full of all of it. These aren’t just small drops in the bucket, either; these are truths which bring an unyielding weight which the three remaining Jedi must bear.

Where Johnson’s screenplay shines is the constant stream of ever-unfolding surprises, with twists and turns taking us to places we didn’t think were possible. Between Rey, Kylo Ren, and Luke, there are more than enough of these shocks to carry their own film, and Ridley, Driver, and Hamill sell these surprises – and their roles – well. As the woman coming into her own and making her way in a male-dominated world, Ridley gives Rey a heartbreaking amount of vulnerability combined with a strength and resolve to match. She’s not one to be cast aside or dismissed at a glance; she makes an unforgettable mark in the Star Wars canon with her wits and resourcefulness, making her as formidable an opponent as her bête noir, Kylo Ren.

The Force Awakens and The Last Jedi are the foundations building toward one final, cataclysmic battle. Not between the Rebellion and the First Order, as we all know that’s going to happen, but between Kylo Ren and Rey. This matchup almost overshadows the storied conflict between Luke and Darth Vader by being established and developed at the personal level, not just at arm’s length or through stories and legend. We see how both are growing as Jedi and as people instead of suddenly being thrust into a prophesied battle.

Speaking of battles, we find General Leia Organa (Carrie Fisher) and the Rebellion on the opposite side of the galaxy, desperately trying to outrun the advancing First Order. Kylo Ren and General Armitage Hux (Domhnall Gleeson) in full pursuit, with Hux serving as a bit of a comic foil, with his swagger and overconfident bluster. The humor in this film ranges from the overt slapstick to the more subtle, with Hux’s first encounter with Commander Poe Dameron (Oscar Isaac) being a highlight of the kind of funny Johnson likes. (It’s almost like a verbal version of the parking lot beatdown between Brendan and Tug in his 2005 film Brick.)

Whereas J.J. Abrams’ The Force Awakens was, all at once, a reacquainting with old friends and a little bit of fan service, Johnson’s The Last Jedi bears more of a personal nature. Action takes a backseat to tying everything together in an effort to get us ready for Episode IX. Not that there’s a lack of action, mind you; there are some epic, pitched battles with disastrous consequences which certainly deserve a mention. But this time, the stakes get pushed to their limits as we go beyond the superficial and into what makes our characters tick.

There are visual callbacks to The Empire Strikes Back and score references to some of composer John Williams’ previous Star Wars themes. All of the commercial staples – the cute-and-cuddlies for the kids, the inevitable star cruiser toys just in time for Christmas – are thrown in, but the rest is purely Rian Johnson as he pulls the series back from fantasy notions and slaps us with the brutal reality of a world at war. Lines are drawn and crossed; the good and bad find themselves in the gray area; and lives are lost with the dying hope of a spark living on. In Star Wars: The Last Jedi, Johnson has given that spark new life and new legends with this wonderful Sequel Trilogy installment.

Star Wars: The Last Jedi is everything you’d hope for in a Star Wars trilogy’s second installment, one of the best since The Empire Strikes Back.