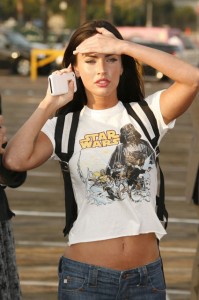 Star Wars is one of those things that has moved beyond a mere movie and entertainment franchise. It’s a cultural phenomenon. Right up there with Coca-Cola. Pick any random group of people off the street and they could probably spend hours quoting from the films. Bag on him all you want, George Lucas is a freaking genius. He’s turned sub-par writing and poor directing skills into a multi-million dollar empire. You could go to any place in the world, and tell someone to “Use the Force.” and they’d know exactly what you were talking about.

Honestly, Lucasfilm made hundreds of millions of dollars off of a Trilogy of Movies, when EVERY SINGLE PERSON that bought a ticket knew exactly how it was going to end.  Of course, the sins of the Prequel Trilogy aside, George Lucas has done some great things. ILM single-handedly changed the way movies and TV are made with groundbreaking special effects techniques, and actually gave us the modern blockbuster movie. Aside from that, he told a very old story in a very new way, and inspired a generation of Sci-Fi authors and filmmakers, not to mention putting Carrie Fisher and her metal bikini into the collective spank-bank of a generation.

I don't care how old she is now, I'd STILL hit that

George Lucas also inspired a legion of extremely rabid fans. I’m not talking about the guys that one the DVD box sets, one to watch, one stored away from sunlight and moisture in its original packaging, and a few random bits of Star Wars  memorabilia around the house or office.

This ode to geek-dom once belonged to Puck-Daddy a.k.a Greg Wyshynski of Yahoo Sports. (You can thank Phil for outing you, Greg)

A Long Time ago, in the john, down the hall.

Even that isn’t far enough though, we’re going to have to push it further.

Like a Dog, but instead of crapping on the floor, he’ll break you out of jail and bring you a beer and your lightsaber.

Then there are the many examples of functioning R2 units out there, This one was uploaded to YouTube by wizojoz. This guy has even built a motion activated C-3PO and a mouse droid. I don’t care what you think about geek-dom and it’s many facets, but this guy is pure effing genius. I recommend you go check out his channel and MANY Robot builds.

He's even got five kills!

The H-Wing CarFighter is owned by Shawn Crosby a.k.a Obi-Shawn of L.A. The Project cost around $8000 dollars, ($7000 for the car itself) Obi-Shawn uses his H-Wing to keep the roads around L.A. free from Imperial Tyranny

Don’t you wish your parents were this cool?

Not only did they hook him up with a sweet A/V set-up, They turned his bed into a Y-wing StarFighter. Unfortunately, at last reporting this house was on the market. Which is probably a good thing, because once the kid hits puberty and he starts bringing girls home. I doubt he’d want to try to lose his cherry in a mock-up of a Starfighter that went down in flames in nearly every shot it was featured in. After all, no guy wants the words, “That’s a negative impact, just a peck on the surface.” associated with any sexual experience. I just hope a true fan buys the house, so this shrine to awesomeness doesn’t wind up remodeled out of existence. (image from gizmodo.com)

Finally, proof even Star Wars nerds can have a healthy and normal relationship. 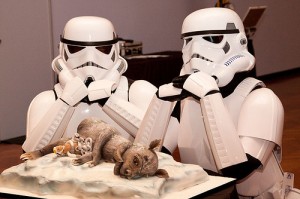 Because nothing says 'I love you', like stuffing them inside a Tauntaun

This Dead Tauntaun Wedding Cake was made for Star Wars Artist Chris Trevas and his new bride, Julie. It was made for the happy couple by Courtney Clark of Cake Nouveau from TLC’s Ultimate Cake-Off. The full story and more images are available from Star Wars Blog.

So there you have it folks, These guys have raised the bar for the uber-nerds, and I, for one, am impressed