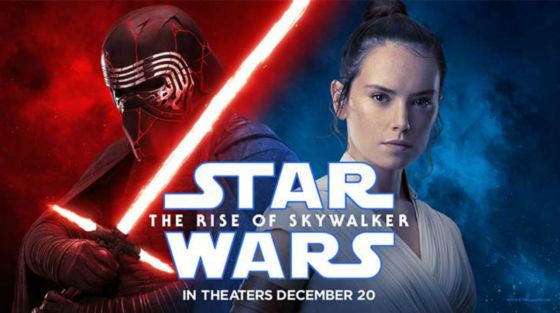 Thanks go to all of the toxic, hate-spewing fanboys. Thanks for thinking you knew better than the filmmakers. Thanks for not being able to take a chance on something new and steadfastly sticking to your deeply-entrenched sense of entitlement. Thanks for helping to ruin what could have been a momentous closer to a 42-year-old film series which means so much to a lot of us. Because you were uncomfortable with the unknown path Rian Johnson started to lead us down with Star Wars: The Last Jedi, we now have exactly what you wanted – a return to the safe and familiar, where your egos are placated with a lack of originality.

There is absolutely no scene which doesn’t pander to this despicable sect of fan culture. Right from the beginning, the focus is on the Bad Robot-era’s male leads as they duck and dodge First Order TIE Fighters or conduct shadowy meetings in an underground lair. Happy yet? If not, the next scene will make you very ecstatic, as it shows Rey (Daisy Ridley) attempting and failing at her Force training. Surely you’ll be delighted at her lack of success, right? The writers have brought her down from being a balls-to-the-wall hero to someone who’s suddenly way too unsure of herself. Congratulations; you finally have a movie where Rey’s a Mary Sue, just like you wanted.

Oh, the writing in this film. The writing. Every joke has to be told in triplicate; you can feel numerous, obvious visual or dialogue references to past films coming, as if on a meticulously-timed schedule; the notion of romance is quickly shoehorned into at least two different storylines; and familiar characters are back in the exact same places they were before. Worst of all, a hurried-feeling examination of one character’s duality (and how their body is positioned when all is resolved) is proof positive that director/co-writer J.J. Abrams has hewn so close to Return of the Jedi‘s outline for fear of pissing off the rabid idiots who feel like they’re owed something.

Every plot point relies so heavily upon the characters and locations of the Original Trilogy to the point of groan-worthiness. Several of the planets you’ve seen before all have something pivotal hanging in the balance, with only one new planet being of any valued importance; even then, it’s home to one of the Original Trilogy’s most linchpin characters. True, as this is the Skywalker Saga’s finale, any attempt to reteam with George Lucas’ original characters must be made, even to the film’s detriment.

The story itself is more akin to a travelogue as it finds Rey, Finn (John Boyega), Poe (Oscar Isaac), and Chewbacca (Joonas Suotamo) skipping from planet to planet to find an artifact capable of pinpointing the location of the film’s ultimate villain. Aw, hell, it’s no secret, seeing how they released the news in April at the Star Wars Celebration – it’s Emperor Palpatine, once again played to ghastly perfection by Ian McDiarmid. No indication is made as to how he survived his fate at the end of Return of the Jedi, but here he is, dangling from the end of (and kept alive by) what looks like Dr. Channard’s rig at the end of Hellraiser II: Hellbound. A throne and his red-suited Royal Guards are nearby, and once again, he says something to the effect of “_____ will come to me.”

Do you see where this is going? And do you know how infuriating it is that for the final film in the Sequel Trilogy, we’re just given more of the same? There’s even an underground-dwelling creature meant to bring back memories of the Sarlacc, for crying out loud. Some might not think it’s a bad thing, but after the previous installment’s striking imagery and how it pushed us into new places, a step backwards is exactly that – regression. Sure, Abrams imbues it with very in-the-now filmmaking, distancing the film’s look from the relative languid placidity of Lucas and Johnson’s films and going with the immediacy he established in The Force Awakens. His skills as a visual stylist are never in question, as there are some inventive vistas we’re granted before falling back on sights previously seen.

This review isn’t meant to kid anyone – of course, you’re going to see it in theaters, and you should. This is epic, grand adventure worthy of the largest screen possible; it’s 42 years of the Skywalker myth coming to its end both behind and in front of the camera. John Williams bows out with his final Star Wars score in triumphant fashion; fans of the series will want to stick around after the film, as the credits score does something it has never done in the eight films which precede this one. If the story itself didn’t tell you the Skywalker Saga was over, this music cue caps it off definitively.

Writers Chris Terrio (Batman v Superman, Justice League) and Abrams also inject a boatload of political commentary, making this one of the few Star Wars films which hits close to home in its timeliness. The stealing of children, othering by those in power, the conscription of the young into armies and what happens to them as adults, and hope in the face of the impossible – there’s a lot ripped from today’s headlines. Or maybe it’s just a coincidence, as the Empire and Rebellion have always been metaphors for our daily battle for the balance between right and wrong.

To be quite fair, it’s not all doom and gloom for those wishing for a more satisfying experience. The film’s many arcs – redemption, power struggles, the ultimate battle of good versus evil – tug at us and will us to go with the film through its multitude of journeys. Everyone has their own end to tie off or to rectify before we close the books, some more neatly than others. The Bad Robot core trio of Rey, Poe, and Finn are every bit the heroes we need, giving us a new family to root for and follow with gusto, similar to the way we got behind Luke (Mark Hamill), Leia (Carrie Fisher), and Han (Harrison Ford) all those years ago.

And that’s where we wind up. In a familiar place decided upon by a legion of folks who didn’t want anything but the reliable. People who didn’t want a film to challenge them the way The Empire Strikes Back did in 1980. The Rise of Skywalker reads like a mashup of the 1977-1983 trilogy, repurposing battle heroics and quiet character moments, but without the soul-grabbing necessity or gravitas behind it. It’s an entirely surface-oriented film with only the character histories setting it apart from a stock-standard war movie. You’re not going to avoid seeing it in theaters, but know in advance: The Rise of Skywalker is an important lesson in excessively catering to people who wanted to stop Star Wars from being truly special.

Final Grade: 3 out of 5 stars.
MPAA Rating: PG-13 for sci-fi violence and action.
No post-credits scene, but there is a surprise in the music playing over the end credits.
Running time: 142 minutes.
Distributed by Walt Disney Studios Motion Pictures.

Star Wars: The Rise of Skywalker

Thanks to toxic fanboy culture, the highly-anticipated capper to the 42-years-old Skywalker Saga comes in the form of a rehashed version of Return of the Jedi.