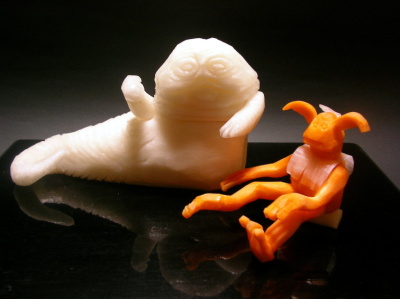 This Japanese Sushi Chef, only known as ‘Oki,’ is a big Star Wars fan, and has carved several figures out of carrots, Japanese radishes and sweet potatoes. He owns a restaurant called Minayoshi in Kadoma City, Osaka. Check out his site for more characters and photos, and also his English blog for more about him. He worked in Toronto for a year in 1995, and he encourages anyone who hasn’t seen Star Wars to go and watch it.

Thanks to @Capspiggy for translations.