Grub > Beer > The State of Craft Beer in Michigan

The State of Craft Beer in Michigan 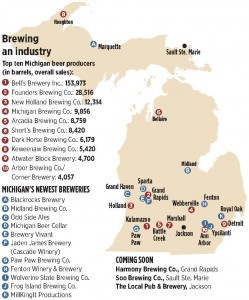 I live in Michigan, and I am a craft beer lover. There, I said it, and I’d say it again. Why? Because saying so in this state carries with it a certain regal air. And no, I’m not trying to sound huffy or stuck-up… the fact of the matter is that it’s true. And the simple reason is this: Michigan ranks 4th in the nation in Craft Beer production with new breweries popping up all the time. Yeah, I said 4th… out of 50. That is roughly two breweries for every 100,000 adults. And with a population of just shy of 9.5 million… well, you do the math. But it’s certainly not just quantity, kids, oh no. It’s quality.

Michigan is home to some of the most well known Craft Breweries in the country as well touting some of the country’s most sought after brews. So let’s take a walk through some of Michigan’s most prolific and delicious breweries… well, the beer is delicious. You get the idea.

Portage, Michigan’s own Latitude 42 Brewery opened its doors just a few years ago in October of 2013, and since then it has quickly become our city’s crowning achievement. You see, Portage, my home city, didn’t have it’s own brewery per se. Sure it had a few small-batch brewers putting out limited product, but nowhere we craft beer heads could go for truly magnificent beer. And then Latitude 42 came to town.

Touting a vast menu of beer, as well as a great menu of food, L-42 offers such delightful fare as a 6% Belgian Amber called Autumn Haze, a 7% Oatmeal Stout called Blackout Stout, a 9.5% Strong Ale called Double Chin, and an 8.2% Black IPA called Fallout. These four just top the iceberg of beers this amazing place offers. As of now they ship six-pack can variety packs, but word has it more is soon to follow. I highly recommend a visit if you happen to be in the area. 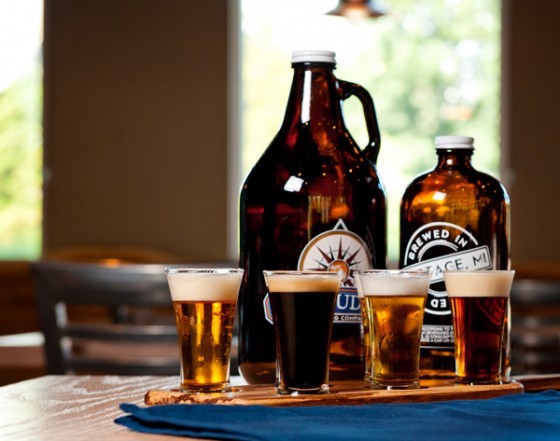 If it’s wacky and overtly eccentric Craft Beers you’re looking for, then your search can end at Short’s. Yes, it’s true, that another Michigan brewery further down our list seems to hold sway over the “eccentric” term, for my money (and the sake of this writer’s definition), Short’s falls far more comfortably within the moniker. Anyway, as I was saying, Short’s is located in Bellaire, Michigan, and features a menu that might even be considered just this side of bizarre.

Just some of their beers include a 5.5% IPL (lager) called Alien Einstein, a 5.7% Red London Ale called Bourbon Magician, a 6.4% American IPA called Dan’s Pink Skirt, an 8.4% Double Belgian IPA called Pan Galactic Gargle Blaster, and a 10% Brown Ale called Bananarama. And again, this is literally a mere scant taste of what this brewery has to offer. Much of their menu is shipped in all sizes from 4,6, and 12 packs in both standard and amazing variety packs. These guys are simply kooky. 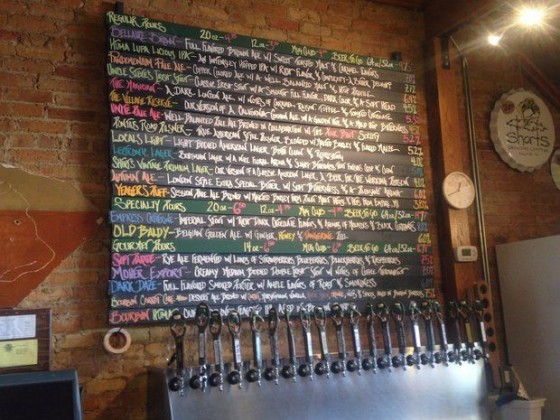 Located with a few others in Traverse City, Michigan, Right Brain is relatively new to the distribution game, though the brew pub itself has been around a few years. Named quite creatively for an incident in which brewmaster / founder Russ Springsteen was told after a test by his Writing teacher that he was “Right Brained”, this brewery certainly takes its title to the extreme.

A few of the beers you’ll find here include a 6.5% Brown Ale called Flying Squirrel, a 7% Extra Special Bitter called Satisfaction, a 7.2% Mint Stout called Naughty Girl Stout, and a 9% Belgian Triple called Lips Like Sugar. This particular brewery is one of the newer breed where family is encouraged, including kids since the menu offers food in myriad varieties, including waffle burgers! Yep, you heard me. 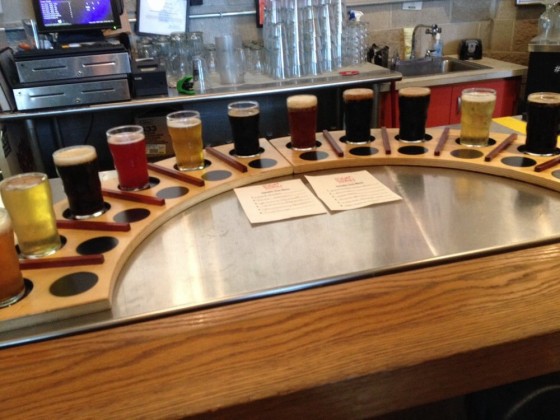 Located in Battle Creek, Michigan, Arcadia Brewing Company is one of the foremost distributors of their local product in the whole state. They have been in the business of producing their nineteen brews since 1996, and spread the love in all of Michigan’s bordering states, including Pennsylvania and New Jersey.

Some of their fantastic quaffables include a 9% English-Style Barleywine called Cereal Killer, a 9% Imperial IPA called Hop Rocket, a 7.5% Triple Chocolate Stout called Cocoa Loco, and a 7% English-Style Smoked Porter aptly called London Porter. So if you happen to be in the Cereal City, make it a point to drop by Arcadia. Or, if you’re in Kalamazoo, you can visit their newest off-shoot location. 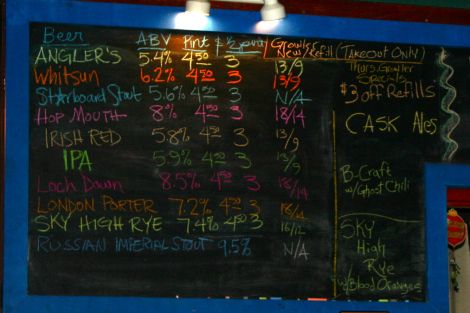 If you spent any time watching The Discovery Chanel last year, you likely stumbled across a show called Dark Horse Nation, on which you got to see the crew behind the Dark Horse Brewery do what they do best: make awesome beer. Since 1997 the guys who’ve been creating some of the best brews in Michigan have turned the quiet town of Marshall, Michigan into a destination, especially when certain beers make their annual arrival.

A few of their best beers include the ever-popular 8.75% Spiced Holiday brew called 4 Elf Winter Warmer, a 9.75% Scotch Ale called Scotty Karate, a 7% Coffee Doppelbock called Perkolator, and a 6.5% IPA called Crooked Tree (which does indeed have a sinister evil twin called Double Crooked Tree that ranks in at 12%). This is the brewery we all sup from when we want something on the more angry side of our local crafts.

Since early 2011, the brewery from Sawyer, Michigan that started out as a few friends brewing a little of this into a little of that has truly gained a foothold in an otherwise nearly saturated craft market. Getting a new beer to take off in this state is a little like seeing a new kid in class wearing a fashion no one has ever seen. It’s tough, and we beer lovers are a fickle lot. Fortunately we’re also willing to try as much as we can, and so Greenbush quickly fit right in.

Greenbush offers a large and distinct variety including a 7% “stoutish-porter with a touch of porterish-stout” called Distorter Porter, a 10.1% Imperial IPA called Brother Benjamin, an 8.9% Maple Brown Ale called Doom Slayer, and a 6% Agave Nectar Wheat Ale called 400 Divine Rabbits. As you can see, they are not shy with the quirky names, nor are they shy with the amazing brews. Plan your trip to Sawyer soon! 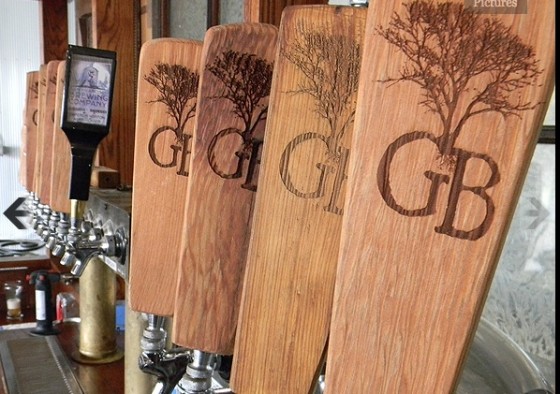 So you say you want to visit Michigan but would rather stay above the bridge? You say you might attend college at Northern Michigan University and want to find a good micro-brewery near you? Fine. Stop asking so many questions, jeez! Why not try Keweenaw Brewing Company located right in the heart of Houghton, Michigan in the north central U.P.? These guys have been around a few years and yes, just in case you’re wondering, they do indeed deliver to us “trolls” beneath the bridge.

Some of their offerings include a 6% Black Ale called Widow Maker, a 5% Blond Ale called Pick Axe, a 5.5% Pale Ale called November Gale, and a 6% Amber Ale called Red Jacket. Their menu may be sparser than their craft cousins, and their location a bit way out there, but what they do offer is delicious. Oh, and they only distribute in cans and as far as I know only throughout Michigan. 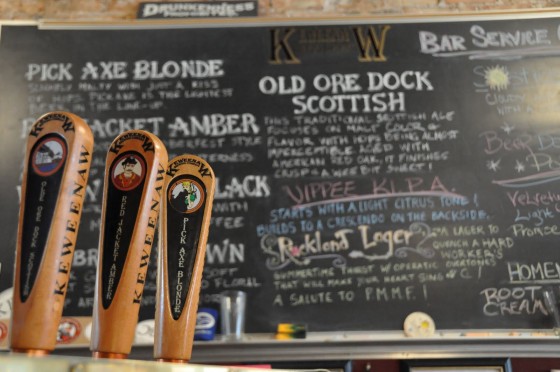 Grand Rapids, Michigan is a pretty big city, and as such they have quite a few craft and micro-breweries (including Hop Cat and Grand Rapids Brewing Company, two of the many I have been to), but the one that stands a bit taller than the rest is Founders Brewing Company. Brewing beers that rock the palate, scream with flavor, and deliver big on their founding roots (see what I did there?)

Anyway, Founders offers many beers, a few of which I am about to list here, but it’s their incredibly sought-after Kentucky Bourbon Stout -a once a year, small-batch offering- that has spread their word literally far and wide. To prove the point, I have been living here my whole life and have been a craft beer head for over a decade and have just this season got my hands on one of its 24$ four-packs. And yes, it was worth every penny at it’s 11% ABV. Some of their other beers include a 10.2% Bourbon Scotch Ale called Backwoods Bastard, an 8.9% Imperial Black IPA called Dark Pennance, and a 5.7% Raspberry Ale calle Rubaeus. This is craft beer for the new tasters, and this is what G.R. is all about. 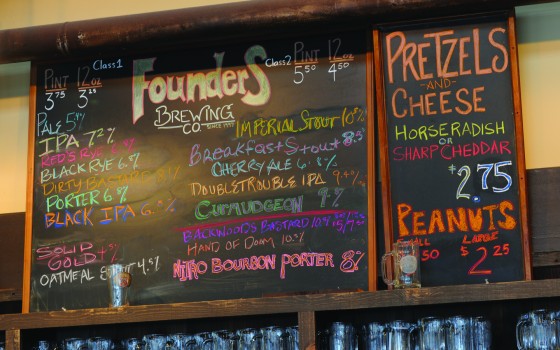 Have you heard of the Seasonal Wheat Ale called Oberon? How about the consistently perfect IPA called Two Hearted? Well if your one of the lucky states that now gets Bells Beer, you likely have. But it’s the taste, folks, that brings you back. Sure, Oberon is slightly different every March upon its arrival, despite what people want you to believe, but even so it still ushers in Spring here in Michigan. Speaking of which, Bells Brewery is located right here in Kalamazoo (and technically Galesburg), Michigan and has been for many years. Their Eccentric Cafe is located smack dab in Downtown Kalamazoo and offers all their brews on tap as well as a slew of merchandise and many bottled offerings not found in stores.

Some of their other beers include a 10% Double IPA called Hopslam, a 5% Lager Beer (sometimes called Lager of the Lakes), and a 6% Golden Rye Ale called Smitten. When one thinks of Michigan craft beers, Bells tends to spring to mind first. And that’s great, because it just proves that over 25 years of brewing can’t be wrong. 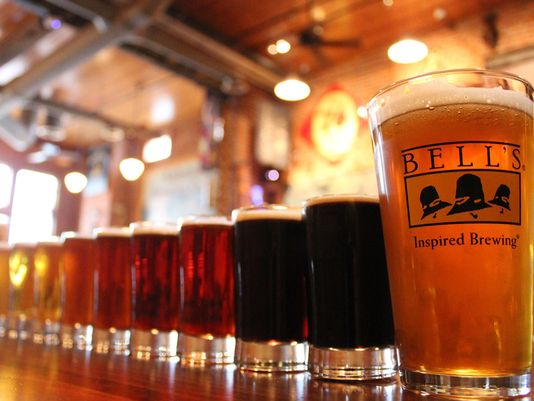