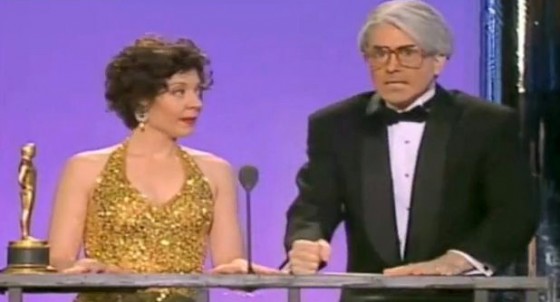 Before Stephen Colbert was lampooning network news talking heads and right-wing blowhards, he was a writer and a performer on 1996’s The Dana Carvey Show. Even though it lasted only seven episodes before being dumped by ABC, the series boasted a veritable who’s who of present-day comedy talent, including Louis C.K.,Steve Carell, Robert Smigel, Charlie Kaufman and, of course, Colbert.

It’s Oscars week, so I’m on the lookout for anything that effectively trashes the monotonous pomp and circumstance of Hollywood’s biggest night. And this skit featuring Colbert doing a spot-on impression of an angry Gregory Peck at the Academy Awards fits the bill.

Damn. The “insensitive” foreign stereotypes roll off the tongue like a samurai sword through hot sushi. No wonder it was cancelled prematurely. I can see the ABC executives now, soiling themselves like newborn babies at the thought of prudish special interest groups picketing outside their high-rise offices. Isn’t freedom of expression great?