Sports > Other > Stephen A. Smith Demonstrates Everything Wrong With ESPN

Stephen A. Smith Demonstrates Everything Wrong With ESPN 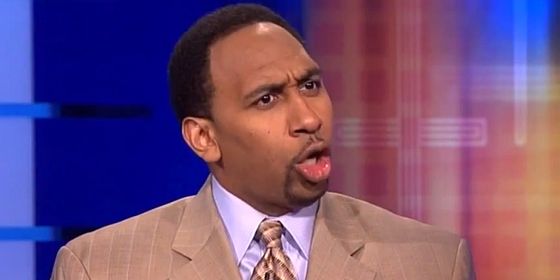 ESPN’s “First Take”, featuring windbags like Skip Bayless and Stephen A. Smith, has long been criticized as a free-for-all where no one is ever held accountable for what they say. Smith seems to have crossed that line today, when he appears to have said “N—a Please” on air in a discussion about Kobe Bryant.

This is the second time that Smith has been accused of saying the word on air. In December of 2011 he used the same term to refer to NBA star Lebron James on air. Smith avoided punishment for the previous incident, as it wasn’t clear what he said. That isn’t the case this time, when even a casual listener can clearly make out the offensive word, before co-host Skip Bayless quickly changes the subject.

Smith, responding to heated criticism from the internet, issued a statement in which he refused to acknowledge what he said, or apologize for it. In his comments on air Smith took to the offensive, adopting a tone that suggest that he was under attack and people were making up the accusation. His laughable excuse, that he is a New Yorker who talks fast, rings hollow to viewers who understood every other word Smith says. Smith offers no alternative to what he might have said, leaving watchers to conclude that he is merely lying to cover up his mistake. If his defense is true, it is hard to believe that ESPN would allow someone who talks so fast that viewers couldn’t understand him to hold a prominent spot in their lineup. It is telling that, in the re-airing of “First Take” later in the day, ESPN cut out the offensive word.

ESPN also faces criticism for how they are reacting to this story. ESPN has announced no punishment for Smith, and allowed him a platform to air his insulting non-apology. Earlier this year ESPN suspended anchor Max Bretos for a month for using the common phrase “chink in the armor” when referring to Asian-American basketball player Jeremy Lin, and fired an online editor for using the same phrase in a headline on their mobile platform. This is also the same network that, in 2008, suspended reporter Jemele Hill for making a reference to Hitler in a story about the Celtics.

This obvious double standard strikes at the heart of all that is wrong with the network, where the ability to bring in viewers trumps any responsibility for intellectual honesty. ESPN won’t take Stephen A. Smith off the air unless it threatens to hurt their ratings or ad sales for the same reason that he is on the air in the first place, his controversial attitude generates viewers. Accountability isn’t for the stars and executives, something made abundantly clear at ESPN in the past.